While serving a mission in Guatemala, Ryan S. Keller, ’04, further developed an already growing passion for international issues that has since driven him onto USA Today‘s 2004 All-USA Academic First Team. 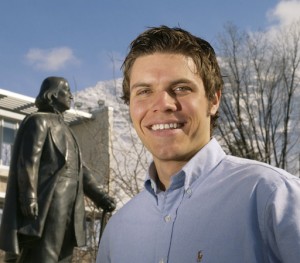 Ryan Keller took 24 credit hours his first semester at BYU and earned straight A’s. Also he dove into a series of causes, service projects, and other activities. Photo by Jaren Wilkey.

“Things I saw on my mission challenged my preconceived notions of what success means—it’s not necessarily succeeding in the corporate world or earning lots of money,” says Keller, who served in the Guatemala City North Mission of the Church of Jesus Christ. “I have always wanted to do my best and work really hard. Now I want to do my best so I will be better equipped to help people.”

Keller, of Holladay, Utah, joins 19 other undergraduates from schools like Harvard, Stanford, and Duke on the prestigious list.

“The honorees tend to be outstanding students and broadly educated,” says Tracey Wong Briggs, the USA Today program’s coordinator. “The judges look to see how well students are extending their education.”

Keller graduated from Cottonwood High School and attended Georgetown University for a year before leaving for his mission in 1999. At BYU he has authored three articles for academic journals and won a $30,000 Truman Scholarship, one of 76 awarded to college juniors committed to public service.

“I pursue my passion,” says Keller, 23. “I want to see where I can make the biggest impact, and when I find it, I pursue it.”

He set the tone his first semester at BYU, when he took 24 credit hours and earned straight As. He also dove into a series of causes, service projects, and activities that continues today.

Keller founded and led Students Against Violence, a coalition of students from BYU and other campuses in Utah that opposed a state legislature bill to allow concealed weapons on university campuses.

For two months last summer in Africa, he worked with the government of Senegal and other organizations to make recommendations to improve the cultural and political rift in that country. He then spent August 2003 in Greece at an institute with students from the Middle East and the Balkans, studying international issues and holding formal discussions with the other delegates to address world problems.

He speaks Spanish, Portuguese, French, Arabic, and K’ekchi (a Mayan language spoken in the Guatemalan highlands) after taking more than 40 credit hours of languages and living in three of BYU’s language houses, where residents speak only the designated language.

When asked to explain his high achievement, Keller says, “It’s pretty much hard work. Maybe the secret is a mentality—if you believe in a cause and really want to go after it, you’ll work hard and be successful. That’s true for everyone.”

Keller’s cause is improving relationships between countries, and he says he wants to put himself in a position to “effect change in international relations.” He is hoping to study international relations at Cambridge and eventually attend law school. After a few years practicing international law, he plans to launch his career in government service, perhaps with the State Department.

“Ryan is an enthusiastic student of politics, philosophy, and public service and relishes learning in all ways,” says Darren G. Hawkins, an assistant professor of political science whom Keller assisted on research into Castro’s Cuba. “I would not be surprised to see him as secretary of state some day.”

Seeing Through the Smoke

Guess which school’s students are at the highest risk of smoking?

How can we come to know our Savior?