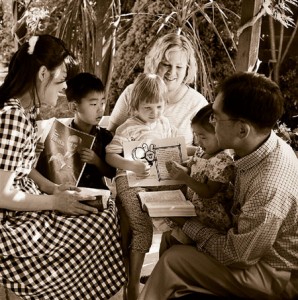 Family, friends, and neighbors can occasionally include divorced people in activities, like family home evening.

Linda Hunter Adams is an assistant teaching professor of English. She has been a single parent for nearly 30 years, served for nearly 12 years as a counselor in the Utah Valley Young Special Interest presidency, and currently serves on a general Church committee for singles.This article is adapted from the author’s essay under the same title in David C. Dollahite, ed., Strengthening Our Families: An In-Depth Look at the Proclamation on the Family [(Salt Lake City: Bookcraft, 2000), pp. 239–41], which was used by permission.Correction: Susanne Frost Olsen, ’75, an author of “An Irreplaceable Influence” (summer 2001, pp. 56–57), pointed out that the byline of the article should have been reordered to read, “Alan C. Taylor, ’93, Kelly DiSpirito Taylor, ’92, and Susanne Frost Olsen, ’75,” as Alan and Kelly Taylor were the lead authors.

Time to Build a Better Marriage

Couples can strengthen their relationships with books, Web sites, and other “self-directed” approaches.

Jeffry Larson says romantic love is just one component of a successful marriage.

One Step to a Healthier Heart: A Happy Marriage

New research shows that a marriage relationship, more than any other, will impact blood pressure—for better or worse.