In high school, Milton P. “Mick” Shannon, ’73, knew his future would be in public service, an ideal reinforced at BYU. After graduation and a few years working with the March of Dimes, Shannon decided to form an alliance where the focus would be children. With his partner Joe Lake and entertainers Marie Osmond and John Schneider, they began the Children’s Miracle Network two decades ago under the Osmond Foundation.

“I think I was able to make a leap from a good, secure job to uncertainty because I was very young, I had never made a lot of money, and I did not have many obligations,” says Shannon. “I simply believed individuals can make a difference. It also helped that I had a supportive family who believed in my dream.” 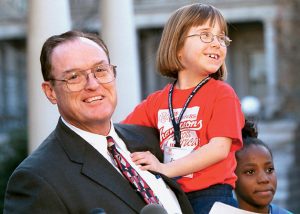 Mick Shannon, ’73, shares a moment with some of the children his organization has helped. The Children’s Miracle Network has brought smiles to sick children by raising millions of dollars to alleviate medical expenses.

Armed with the slogan “Kids Come First,” he began the process of interesting people in helping children.

His desire was to create an umbrella organization to support children’s hospitals throughout North America with an annual telethon, corporate sponsors, radiothons, dance marathons, and other programs, directing donations to local hospitals so the money returns to the community it came from.

The first telethon was based in Boise, Idaho, in 1983, and 22 hospitals, two sponsors, and 30 television stations participated. The Children’s Miracle Network raised $4.7 million. It grew steadily and expanded to Los Angeles within a year. In 2003 the telethon raised $260 million for 172 hospitals in North America.

“We have every market covered in the United States and Canada,” Shannon says. “We have made sure that we do everything with absolute integrity, and I’m pleased that the Children’s Miracle Network maintains an outstanding history and reputation.”

He believes their exclusive focus on children makes the network successful. “When kids come first, all else takes care of itself,” he says. “Early on it was apparent that the children were everything.”

While he can cite dozens of stories of children who have been helped directly from donations, he has an especially warm remembrance of a child whose life was saved during the early years of the network.

“Danny Ragsdale was being treated in Memphis,” he says. “His family had been in a serious car accident and Danny needed an organ transplant. By coincidence a child in Utah had also been in an accident, but he was not going to survive. The Utah family concluded they wanted to donate. The organ was harvested at Primary Children’s Hospital and flown to Memphis. Danny’s life was saved. He appeared on the telethon, as did both sets of parents. All shared their stories, and it was touching. Danny’s story is one of literally hundreds about children who have been helped.”

Shannon—who says he has never had a day when he didn’t want to go to work—also believes it is interesting to see how many people want to make a difference. “They range from CEOs of billion-dollar companies to cashiers. The world is full of good people who are socially responsible and want to put others first. They all feel incredible ownership in the Children’s Miracle Network. Wal-Mart, our largest sponsor, gave $38 million, and it was all done by their people. One of their leaders said they couldn’t turn this off even if they wanted, because their people are so committed to their local children’s hospitals.”