Mentoring in the Miniature

Research. Invent. Publish. In IMMERSE, engineering undergraduates do it all. 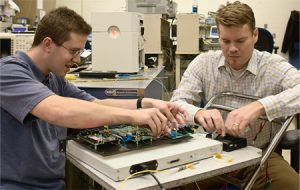 When Zixu (James) Zhu graduates in December of 2008, his name will be on more than a diploma. It will appear on a technical article in the January 2008 issue of the Review of Scientific Instruments. Zhu and the three other undergraduates in his research group coauthored the article with their two mentoring professors.

Getting an article published in a technical journal is uncommon among undergraduates, but publishing has become the norm among students in the Department of Electrical and Computer Engineering’s IMMERSE program (Intensive Mentoring and Microelectronics Research for Students in Engineering). At any given time, 15–20 IMMERSE students are being paid to look for ways to apply microelectronics technology (the technology behind the computer chip) to other fields. And they’re finding them—from developing miniature devices that will yield speedy blood test results to creating sensors that monitor the internal workings of a jet engine.

Stephen M. Schultz (BS ’92) and Aaron R. Hawkins, professors of electrical engineering, launched IMMERSE in 2002 with a grant from the BYU Office of Research and Creative Activities (ORCA). “The whole goal is to get undergrads opportunities to do scientific research, write articles for publication, learn how to give oral presentations—so they learn everything that they need to

know to function later on in their careers, in the workplace, or in graduate school,” says Schultz. IMMERSE, he says, was designed to allow students to experience graduate school as undergraduates.

Their plan is working. Of the 51 students who have completed the IMMERSE program, more than 80 percent have coauthored articles published in technical journals and more than 75 percent have gone on to graduate school. Jonathan D. Young (’09), a junior in the program, says his experience in IMMERSE helped him decide to pursue a graduate degree.

“I definitely gained an appreciation for research that is done now and that’s been done in the past, whatever the subject,” says Young. “It’s not an easy thing. It requires a lot of time and patience, but it’s helped to show me that I want to continue learning.”

Young understands the tedious nature of research. For his IMMERSE project, Young uses a laser to etch lines (called gratings) into the surface of an optical fiber comparable in size to a strand of hair. Each fiber takes him five to six hours. Because the glass fiber expands when heated and contracts when cooled, a change in distance between the gratings indicates temperature fluctuation. After Young creates the gratings, he passes the fiber along to Zhu’s research group, which developed a device that uses light to measure the distance between the gratings. Their final product is a high-temperature sensor. In January Cleveland Electric Company put two of these sensors in a plane engine and successfully tested them on a flight from Florida to Wisconsin.

Leaders in the microelectronics industry are taking notice of IMMERSE student accomplishments. In September the Micron Technology Foundation—a private, nonprofit organization established by Micron Technology—donated $320,000 to supplement the funding the program receives from ORCA. The funding is unique because it is not tied to the development of a specific product.

“They just want us to do undergrad research,” says Schultz. “So we can use this money and let the students have some flexibility to go out and discover new things.”