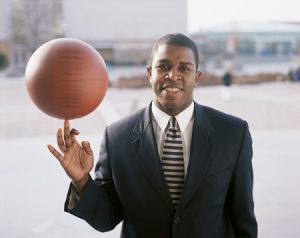 IN February 2002 BYU‘s student body elected its first ever African American BYUSA president, Robert J. Foster, ’03. The election’s significance was heralded by students and journalists, but the occasion marked more than progress in race relations. It represented personal triumph. Because his parents were struggling with drug addictions, Foster’s extended family raised him. When he was 14 years old his father died of an overdose, and his mother moved from New Jersey to North Carolina to be with her children and conquer her own drug dependence. She returned to the Church of Jesus Christ, and Foster was soon baptized. In addition to his parents’ absence, Foster’s youth was marked by a strong stutter that made him self-conscious and hesitant to participate in school. But on the high school basketball court, this hesitance disappeared. He earned an athletic scholarship to Ricks College, where after a mission to Arcadia, Calif., and two seasons on the team, he shifted his focus to leadership. “I thought clubs would be a great place to touch individual lives,” he explains. His contributions earned him the Ricks College 2000 Man of the Year Award. After graduating from Ricks, BYU was the natural next step. Foster became involved in BYUSA, and was soon appointed to the university student council. In January 2002 he decided to run forBYUSA president. He won the three-candidate election, securing 43 percent of the votes. Foster—the first African American student body president of a largely white school—faced the bright media spotlight cast on Utah by the 2002 Olympic Winter Games. He suddenly had two or three interviews a week and seemingly endless speaking engagements—a significant challenge for someone who hated even speaking in class. “I’m not one that likes to draw attention to myself,” he says. “However, if I feel the cause is necessary and that someone needs to speak, I’m not afraid to.” The attention is something Foster did not anticipate and feels he does not deserve. “Being the first African American president here is an honor, but where much is given much is required,” he says. “I feel that I have a lot of work to accomplish here.” In addition to BYUSA and school, Foster, a psychology major, works 25-30 hours a week for Chrysalis Enterprises—a company that takes care of mentally handicapped sex offenders. He also runs a gospel choir and step dance team, volunteers for the Church public relations department, works with the Genesis Group—an organization dedicated to serving the needs of African American Church members—and fulfills his calling as techers quorum advisor in his ward. Foster will soon have a new role to keep him busy—father. He and his wife Carleen are expecting their first child in March. A current emphasis is solidifying the gospel choir he started during his first year at BYU as vice president of the Black Student Union. “It’s a passion of mine, something I love being a part of,” he says. “I’m not the greatest singer, but I’ve learned how to lead people.” Foster, who will graduate in April and plans to attend optometry school, thinks his experience withBYUSA will help him be a stronger leader; but the best thing it has taught him is the meaning of service. “People ask if this was a resume filler. Absolutely not. In reality it would be so much easier to not do BYUSA, but I feel that I’m able to give so much to the student body and to individuals that might need it.”

All Fun and Names

Meet BYU-discovered Jimmer the virus and Bigfoot the bug.

Jesse and Amanda Knight lived lives of service and made significant financial contributions to BYU.

The new president of the Emeriti Association, Ruth Jackson, has an impressive résumé.