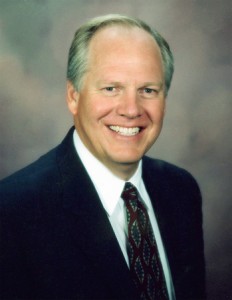 Waterskiing, scuba diving, playing guitar, reading to his grandchildren—Ronald J. Gardner’s (BA ’75) favorite pastimes don’t seem exceptional until you learn that he is blind. Gardner, an attorney from Bountiful, Utah, is involved in much more than recreation, however. He has been appointed by President George W. Bush to the U.S. Access Board, an independent federal agency that seeks to advance accessibility for persons with disabilities.

“I hope to improve the lives of blind and visually impaired people,” Gardner says.

Gardner says he enjoys working on the board because it has the power and authority to bring about change. He

will serve until 2011. He has also been appointed to the National Advisory

Eye Council by Mike Leavitt, secretary of the U.S. Department of Health and Human Services.

As part of the board, Gardner wants to improve access to technology in the United States. “In the area of electronics, we’re quite far behind,” he says. “As a blind person, I know the daily frustration of not being able to read the screen on my cell phone or microwave or ATM.”

Making the world more technologically friendly for the blind is just the beginning of what Gardner hopes to accomplish on the board. “Seventy-five percent of blind people are unemployed,” he notes. “What we’re trying to do is help individuals learn responsibility and skills so they can be ready to work.”

Nowadays, when so much is changing, traditions still give family members strength and stability.

Computer scientist and mother of four Meher Shaikh sees no sacrifice as too high a cost for education.

Many BYU graduates find success by perceiving a trend and skillfully riding the current.