By Lisa Ann Jackson Thomson in the Spring 1997 Issue 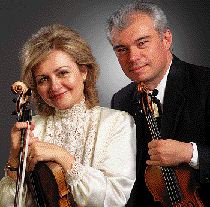 Igor and Vesna Gruppman find a profound power in music, a power they seek to share with music lovers and students alike.

The program touted, “A Little Chamber Music,” with the Edmonton Symphony Orchestra and internationally reputed violinists Igor and Vesna Gruppman. As the performance began, the duo sent strains of Bach and Arnold wafting through the concert hall to a transfixed audience. One reviewer later wrote, “Gruppman and Gruppman were almost magical in their sense of partnership. One often hears of the Bach Concerto in D minor for Two Violins as being a ‘contest’ between solo voices. There is no such impression from this duo. The first movement had two voices making the same case at the same time. The second was a moving dialogue, the finale a note-for-note exact partnership.”

In describing their performance, the reviewer outlined Igor’s and Vesna’s lives. As child prodigies in their native lands–Igor in Ukraine and Vesna in Yugoslavia–they were two voices learning the same musical language. A moving dialogue began when they met in Moscow, and after emigrating to the United States and beginning their personal and professional lives as a duo, they have become a note-for-note partnership.

Last August, they brought their partnership to BYU, joining the School of Music faculty. Igor and Vesna add their positions at BYU to an already brimming plate of musical commitments. In 1996 alone, they played as guest soloists in Israel, New Zealand, Canada, France, England, Russia, and the United States. Igor commutes to London where he shares the responsibility of concertmaster for the London Symphony Orchestra, and Vesna commutes to San Diego where she is the concertmistress for the San Diego Chamber Orchestra. They have also managed to dollop various recording projects on top.

“It is certainly a great advantage to us as an institution to have the Gruppmans,” says Clyn Barrus, director of BYU’s School of Music. “We have had a tradition of very strong violin faculty for many years, and the Gruppmans fit into that tradition so beautifully as being marvelous players with international reputations. More important, in terms of what we are trying to do here at BYU, they are extraordinarily gifted teachers.”

Igor and Vesna certainly have credentials behind their teaching. Igor started the violin, by default, at age 7 in Kiev, Ukraine. His instrument of choice was the piano, but his local music school had too many piano applicants that particular year, so he took up the violin instead. Discovering he had a knack for the instrument, he won several competitions, and by age 15, he had won scholarships to study at the Central Music School in Moscow, an elite school that teaches elementary through secondary subjects combined with intense musical training.

At age 8, Vesna made her orchestral debut in Yugoslavia with the Belgrade Chamber Orchestra and went on to win top prizes in several national competitions. By age 14 she had become the first Yugoslavian violinist to win scholarships for study at Moscow’s Central Music School. There she met Igor, and they went on to finish their studies together at the world-renowned Moscow Conservatory, studying under such masters as David Oistrakh and Yuri Yankelvich.

Soon after graduation from the conservatory, Igor sought legal emigration from the Soviet Union with his parents, grandmother, and younger brother. At the height of the Cold War, requesting legal emigration put would-be emigrants in precarious circumstances, as they, in essence, declared their disloyalty to the Soviet Union. Considered outlaws by the state, those who applied lost their jobs and social standing while waiting for permission to be granted. For many, permission never came, and they were permanently labeled outlaws in a country they could not leave. For Igor’s family, permission came in 1979, a year and a half after they submitted their request, and they were given 24 hours to gather their things, say goodbye, and board a train. After stops in Austria and Italy, they settled in southern California, where Vesna joined Igor some months later. She came as a tourist, and the high-school sweethearts were married, a freedom denied them in the Soviet Union because of her foreign status as a Yugoslavian.

After arriving in the United States, the couple started from scratch as musical unknowns, rebuilding the promising careers they had sacrificed to emigrate. Through much hard work, determination, and, as they put it, “blessings from God,” they have become internationally sought-after performers, both as a duo and as soloists. They founded a successful chamber music society in southern California, Igor has been the concertmaster for the San Diego Symphony Orchestra and the San Diego Chamber Orchestra, and Vesna has been the concertmistress for the San Diego Opera. She also has been an associate professor of music at California State University, Los Angeles, and was the artist-in-residence at San Diego State University. The two have made several recordings between them, including a recording of Malcomb Arnold’s Concerto for Two Violins and String Orchestra, for which they have been hailed the “archangels of the violin.”

Such is a fitting title for this partnership; their real magic stems not from their impressive vitae, but from the profound sensibility they share for the power they find inherent in music.

“Music was everything to us since childhood,” Igor says. “We gained a very strong testimony of music being something very special, very spiritual, very healing. It was, as we used to say, something from the other dimension. In a sense, in Russia, without the freedom of worship, music was the spiritual outlet of the nation.”

Vesna adds, “If one is really reverent to the music, you hear that there is a supreme being. You can’t escape that; it is all-powerful.”

They concede that they ultimately had to leave Russia to discover the source of the power they felt in music. Their search was brief. Soon after settling in California, they met missionaries from the LDS Church and were baptized.

“It came full circle,” Vesna recalls. “It was difficult at the beginning because we knew that music was so special and spiritual, but we didn’t have a connection. Then as we were learning about the gospel, it was absolutely clear to us what music is. You can play or sing like an angel because you know you are an instrument in the hands of God.”

“The two things came together so perfectly,” Igor continues. “When we started to learn about spiritual truth, it was reconfirmed in a powerful way about the mission of music both inside and outside the Church, and I guess we saw our mission from that point to be the best missionaries in music.”

Though they know three languages, the Gruppmans have found that the “unspeakable gift of the Holy Ghost” (D&C 121:26), as they like to call it, is communicated more purely through inspired classical music than through the imperfect spoken word. Whether playing at a fireside or soloing with a world-class orchestra, the Gruppmans have dedicated their partnership to sharing the Spirit through music. In deciding to come to BYU, they hope to pass this legacy on to their students.

“BYU is the only learning institution in the world where we can accomplish what we want to accomplish in our teaching,” Vesna says. Both she and Igor have felt frustrated trying to share with people the profound link they see between music and the gospel. As they associate with musicians, they find common ground in music, but not in the gospel. As they associate with Church members, they share spiritual feelings, but not always music. At BYU they have found a melting pot for both.

Soon after the Gruppmans arrived at BYU, they sat mouths agape at the 1996 University Conference listening to President Merrill J. Bateman articulate for the university the goals the Gruppmans had already set for themselves.

“The issue is the Spirit with which subjects are taught,” President Bateman said. “The final test is if the teaching of the subject is both ‘intellectually enlarging’ and ‘spiritually strengthening.'”

According to their students, Igor and Vesna pass the test.

“Vesna has really emphasized that we as musicians have a mission to share our talents and the Spirit through music,” says Arian Goodman, a senior from Independence, Mo., majoring in violin performance and pedagogy. “It is a gift that we can share with others and that is motivating. When you get frustrated learning a skill, if you remember what your purpose is, it helps you keep going.”

In teaching a skill to a student recently, Igor compared the rhythm of the piece to the commandments. “For Bach, the rhythm is like commandments for us. It’s the law. It seems restrictive, but as long as you stay within the structure, you retain the ultimate style of the music. It is very profound to follow the rhythm.”

“They have a beautiful way of blending the principles of the gospel with music,” says Roger Drinkall, a cello professor in the School of Music. “And despite the fact that Igor is concertmaster of the London Symphony Orchestra, one of the best in the world, he takes his teaching here just as seriously. He in no way makes this second best.”

Igor admits that he misses Provo when he is in London more than London when he is in Provo. “It’s quite a special place here, with the students and with the Spirit so strong and so vital. We get a lot of rejuvenating energy from the students.”

And the students receive the same energy from Igor and Vesna as the Gruppmans work with tenacious commitment to teach excellent violin technique and sincere reverence for music.

“Music at its best is the ability to express the deepest feelings of our hearts and souls,” Barrus says. “One of the great things the Gruppmans have to offer is an understanding of that–especially the spiritual aspect–and the ability to combine it with the high training music demands.”