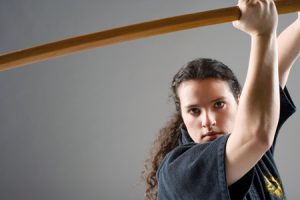 You might expect the winner of a Korean martial arts competition to be Korean. But at the 2006 Haidong Gumdo World Championships, held in Seoul, Lina Ferreira (’07), a native Colombian and BYU English major, took home the gold medal. Ferreira has been studying martial arts—including tae kwon do, judo, aikido, and kung fu—since she was 7 years old. She excels at haidong gumdo, which focuses on sword-fighting mastery, and recently achieved the black-belt level in the sport.

BYU student’s journey after being kicked by horse, a month-long coma, and a fight to return to normal life.