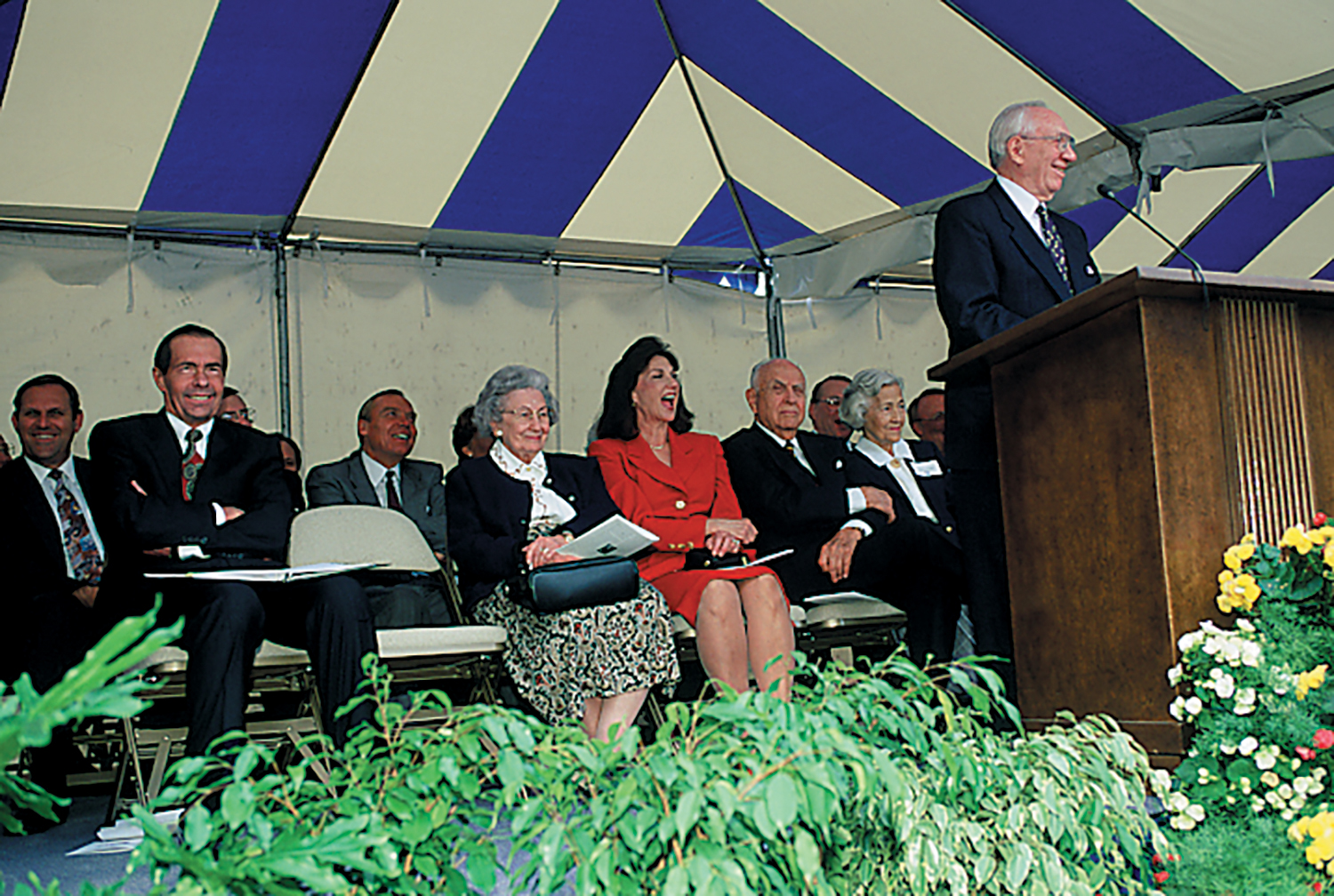 “A law school really, when all is said and done, comprises two things: a faculty and a library,” said LDS Church President Gordon B. Hinckley at the groundbreaking of BYU’s new law library. The library is scheduled for completion in the winter of 1996. Photo by John Snyder.

Stating that “a law school cannot be a great law school without a great library,” LDS Church President Gordon B. Hinckley and other members of BYU’s board of trustees broke ground in May for the new Howard W. Hunter Law Library at the J. Reuben Clark Law School.

“A law school really, when all is said and done, comprises two things: a faculty and a library,” noted President Hinckley, chair of BYU’s board of trustees. “The library is the source of all that has happened in the past, by way of rulings, judgments, laws, statutes, and programs, concerning the behavior of men and women. It contains the traditions that reach back thousands upon thousands of years. This becomes the basis of our civilization.”

The new addition and substantial remodeling of the existing library is ﬁttingly named to honor President Howard W. Hunter, the 14th president of the LDS Church, who died on March 3, 1995.

“We are highly honored that our law library will bear the name of the only president of the Church who was also a lawyer,” BYU President Rex E. Lee said. “We don’t name buildings for those who give money, but for the people who represent what the university is trying to achieve. Howard W. Hunter’s life represents the highest standards of professional excellence, integrity, and service to the community—values that we attempt to impart to our law students.”

Scheduled for completion in the winter of 1996, the new library’s ﬂoor space will be twice that of the present facility, providing 38,000 square feet of research and resource areas. The addition will wrap, horseshoe fashion, around the second and third ﬂoors of the north half of the law building.

At the groundbreaking, President James E. Faust, second counselor in the First Presidency, admonished the school to instruct more than the laws of man. “My hope and prayer is that there will be a compensatory amount of study of the laws of God in view of the size of this great law library,” said President Faust. 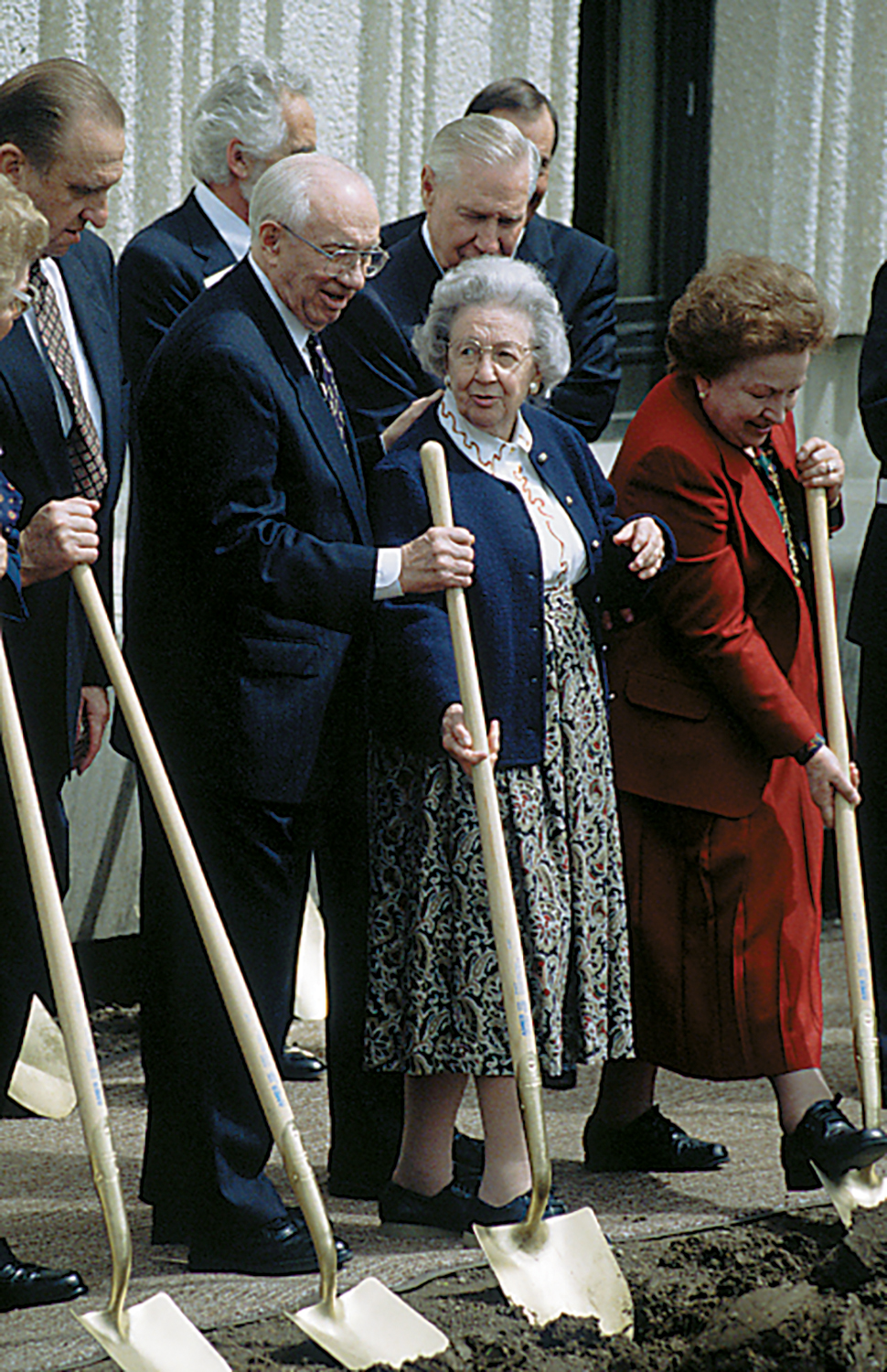 President Gordon B. Hinckley and his wife, Marjorie, join President Thomas S. Monson and other dignitaries in breaking ground for the Howard W. Hunter Law Library. Photo by John Snyder.

Approximately $11 million is needed to complete the Howard W. Hunter Law Library. It was announced at the ceremony that Jon and Karen Huntsman, close friends of President Hunter, have donated $5.5 million of the needed funding. The Huntsmans were in attendance at the groundbreaking, as were President Hunter’s widow, Inis Hunter, and his sons, John and Richard Hunter, with their families.

Called as an apostle in 1959, Elder Hunter began his association with the Law School in 1970 when the school was ﬁrst proposed to the BYU Board of Trustees, of which he was a member. He was subsequently involved in the selection of the ﬁrst dean and in the school’s initial fund-raising efforts. The Howard W. Hunter Professorship was established in 1989 at the Law School to support faculty research, writing, and scholarship.

President Thomas S. Monson, ﬁrst counselor in the First Presidency, noted President Hunter had an incredible love for history and learning, with an extensive library of his own.

Assistant photo archivist at the Harold B. Lee Library, digs through special collections and more to find holy grails.

Library Tales – Stories From the Stacks

A Library for the World

The library is expanding again - this time digitally - making holdings more accessible around the world.