From Ethics to Emeriti 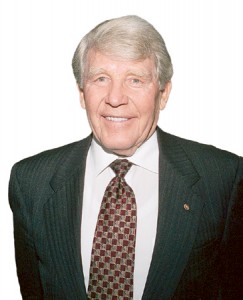 QUINN G. McKay, ’54, exudes warmth and kindness. His intellect and broad sense of humor are also readily apparent. But it isn’t long before the newest president of BYU‘s Emeritus Association probes his listener with searching questions about ethics and morality.“What is your position on the death penalty?” he asks. “And what do you think Christ would do regarding the death penalty if He were here? Have you ever thought about what approving the death penalty does to us personally?” He doesn’t go for easy answers.McKay may engage in such conversations because he has spent much of his life teaching business ethics at several universities. His interests lie in helping people draw the lines of ethical behavior, reduce “gray areas,” root out hypocrisy, and face up to double standards. This philosophy, found in his 1997 book, Is Lying Sometimes the Right Thing for an Honest Person to Do?, challenges individuals to examine their values against the backdrop of a Judeo-Christian ethical system.In his new position as emeritus president, however, he will have another focus as well. BYU‘s emeritus organization is open to people who attended the university more than 40 years ago and to retired faculty and staff. McKay says that while Utah County is well represented in the organization, he hopes to expand the participation base.“I want our emeritus membership to feel affiliation and attachment to the institution,” he says. “Many drift to other parts of the world and their BYU experience becomes distant. I would like people to have a continuing experience through the Emeritus Association. The more we interact with people, the stronger our sentiments become.”While the group’s bylaws require only one activity a year, McKay supports an expanded schedule. This year that will include an Emeritus Family Home Evening Aug. 20, a December combined concert with the University of Utah, a January luncheon, and a May education day.While a student at BYU, McKay studied accounting and was student body president and president of the Pacific Student Presidents Association. Despite his BYU loyalties he married Shirley Frame, the University of Utah Day Queen. “It was a bit of a scandal,” he admits, “but Ernest Wilkinson made her an honorary alumna, so it was okay.”The McKays left BYU for Harvard, where he received an MBA and was elected to the student executive committee. He then went to Rangoon, Burma, as a business consultant to help upgrade the University of Rangoon. Later, after receiving a DBA from Harvard, he taught business at BYU and became the first director of its MBA program.The University of Pittsburgh came calling, though, and persuaded McKay to help start a university in Nigeria. In two years there he founded a department of management, established eight scholarships, and helped build an 11,000-volume library. He later served as dean of the School of Business at Weber State College before moving to Texas Christian University. As part of that responsibility, he spent a year as a visiting professor at a Swiss university.Following his Texas assignment McKay became a senior vice president for Skaggs. “I decided it was time to see if I could do what I had been teaching,” he says. He also worked as an executive in Tracy-Collins bank.Now in his 70s, McKay remains active professionally as an adjunct professor at the University of Utah. Lifelong active in The Church of Jesus Christ of Latter-day Saints, McKay has been a mission president in England, a bishop, and a counselor in the Young Men general presidency.

In conjunction with Campus Education Week, the Emeritus Alumni Association is sponsoring a family home evening.

Ten alumni were singled out for Special Recognition Awards.