Former Cougarettes March Back onto Campus 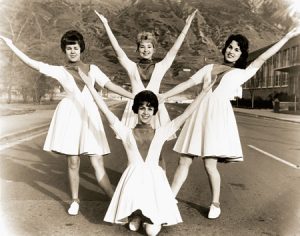 Janet Stringham Billings (BS ’46) and Rita Clement Parker (BA ’48) may not be able to kick up their legs quite as high today as they could 60 years ago, but they still share the spirit and sisterhood they felt when they marched together for their alma mater.As members of the original 1946 Cougarettes, they both participated in the yearlong celebration of the marching ensemble in 2006. Shaundee Pay Bull (BS ’02) and Shalice Pay Larsen (BS ’97) launched this new BYU affinity group in January 2006 with a reunion dinner. Current Cougarettes performed, and Cougarettes past and present were able to reminisce about their dancing days. 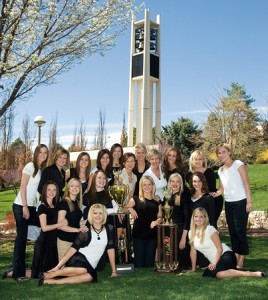 During 2006 generations of Cougarettes–from the early marchers of the ’40s and ’50s to the national-championship winning dancers of 2006–celebrated the ensemble’s 60th anniversary.

“This long-running organization has touched many people’s lives,” Bull says. “There may be a generation gap, but we are all united through our love of dance and of BYU.”
Their celebration continued in March at the annual Cougarettes concert, where 20 former Cougarettes who had performed up to 20 years ago danced to the song “Legacy,” by Nichole Nordeman.
“The sisterhood we had as Cougarettes was amazing, so it was great to rekindle and experience those feelings again even for just a brief moment,” Bull adds.
In October former Cougarettes mingled at a tailgate party before the Homecoming football game. Inside the stadium, they sat together and waved to the crowd as an announcer recognized the Cougarettes’ 60th anniversary.
The group didn’t just reminisce, though; it also looked to the future by establishing a scholarship fund to help current Cougarettes. “This is an amazing organization; it gives these girls the opportunity to dance and to represent the university and the Church. They have such a strong desire to be examples and role models,” says Jodi May Maxfield (’80), the Cougarettes advisor for the past 16 years. The team practices three to four hours a day, five days a week, and are six-time national champions. Each participant pays most of her own expenses.
“A lot of girls can’t compete nationally because they can’t afford to, especially since most can’t work while being a Cougarette,” Larsen says. “Most everyone is shocked to hear that these girls still have to pay between $700 and $1,000 to compete each year.”
Years of routines, competitions, and awards are only a portion of what it means to be a Cougarette. “It really is about their talents, but I think it’s so much more than that,” Maxfield explains. “It’s about bonding and caring about one another, and that is what you see reflected in their performances. The Cougarettes could not be as successful without that sisterhood.”

Alumni in Texas can now show off their alma mater with BYU license plates.