Flooding the World with Light

By Elyssa Madsen Andrus in the Fall 1999 Issue 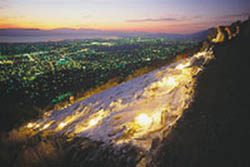 If you asked me four years ago what I would be doing on the eve of my college graduation, I might have described a party with dancing and a roasting pig. Or, more likely, I would have just stared quizzically–at age 18 college graduation is a hazy, incomprehensible vision. I certainly would not have imagined the scene as it is now: I am out in a rainstorm, covered in mud, hiking up Y mountain to light the Y.

This began as a quest for a graduation ritual, some ceremony to bring closure to my BYU years. For me–for many of us, I suppose–graduation snuck up somewhere in between taking tests and applying to graduate school. It just appeared. And the minute I filled out my graduation application, I began wallowing in apprehension and nostalgia. How do you say goodbye to BYU? I had already taken pictures by every bronze statue on campus and eaten so many farewell brownies from the Creamery that I risked chocolate death.

A roll of film and five pounds later, I was still sad and nervous. While researching campus traditions for Brigham Young Magazine, I came across the Intercollegiate Knights (IK), a nationwide club dedicated to chivalric principles and community service. Each year, BYU’s chapter lights the Y on Y Mountain for graduation. This was the ceremony I needed. I called Ammon Hord, a BYU junior and the national president of IK, and begged to go along.

As we bound up the mountain, Ammon, who has hiked the Y so many times he can describe each switchback, doesn’t seem to notice that the trail is a giant Slip ‘N Slide. I, however, am out of breath, worrying with each step that I will lose my footing, tumble down the mountain, and have to attend graduation tomorrow as a human mudball. To slow Ammon down, I ask about IK’s role in lighting the Y.

The Intercollegiate Knights light the Y five times a year, he says: freshman orientation, Homecoming, Y Days, and April and August graduations. In the early days IK members would carry torches up the mountain and ignite the kerosene-soaked mattress batting that they had placed in buckets around the letter’s edges. The Y would blaze. Eventually, however, IK determined the bonfire method was too dangerous and switched to electric lights. When the Y is lit, the club selects one of their group to guard the mountain overnight, making sure the light shines until sunrise.

As we climb, the white rocks of the Y become visible. Finally we reach the top. Two members of the Intercollegiate Knights stand waiting to greet us, shivering in the rain. The Y is outlined with small, 25-watt light bulbs strung on a rubber extension cord. Elizabeth Huestis, IK’s “horrible executioner” (who, in reality, runs meetings instead of chopping off heads), plugs the cord into a generator. Some 50 bulbs flare on, flooding the mountain with light. We stand in silence.

A voice crackles over Elizabeth’s walkie-talkie: “Base 1 to Mountain 1. It looks great from down here.”

Elizabeth thanks Base 1 and suggests we seek refuge in a small cement bunker south of the Y. Used by BYU’s grounds crew for storage, the bunker is a sort of living museum. Torches stashed in buckets suggest earlier lighting traditions. Dusty bags of limestone remind visitors of when bucket brigades whitewashed the Y. Two tattered red cots show wear from IK members who have sought shelter as they guarded the Y.

We sit on the cots and wait out the storm. Ammon tells stories of hikers he has encountered on Y Mountain. Some, he says, were freshmen eager to participate in the coming-of-age ceremony for fledgling Cougars. He has seen couples climbing to look out on the city and plan futures, as well as solitary sojourners with only journals for companionship. Ammon claims the Y has a magnetic quality. “Most people I’ve met didn’t even plan to hike the Y,” he says. “But then they saw the lights shining down on the valley and knew they had to come.”

As he says this, I want desperately to see the lights. Wandering back into the rain, I sit and squint at the bulbs until they blur into a single, shining light. So much has come full circle. When I was a freshman, the lighted Y signaled a beginning. I had moved more than 700 miles from my Arizona home, alone, trusting my BYU alum parents that BYU really was the place. Back then, I hadn’t heard of lighting traditions or hiking the Y–I just figured the letter glowing in the sky meant something wonderful was about to happen.

Now I am close enough to roast marshmallows on the lights. The Y that shines tonight is a signal of commencement, a goodbye Y. Yet it also signals a beginning. Something wonderful is again about to happen, for me and for the hundreds of other graduates who will file into the Marriott Center tomorrow. Armed with BYU’s spirit of service, we are stepping out into a world with some dark, scary problems–a world in desperate need of light. Much more than this sign shining over the valley, we are the symbol and spirit of BYU. We are the lighted Ys that will inspire and brighten. It is our turn to flood the world with light.

A Sister to the World

Cho Yoong Jin is an inspiration to the BYU community. Read her story.

This photograph shows the beauty of science.

BYU researchers have traveled across the globe to train engineers on the software they created to model water features.