You only get to be a freshman once, but that doesn’t mean you can’t keep acting like one. 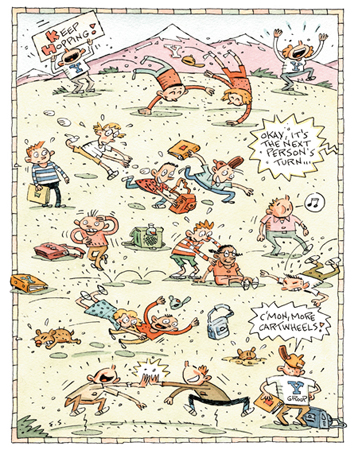 You only get to be a freshman once, but that doesn’t mean you can’t keep acting like one.

Through the pandemonium of 4,000 bodies running around on Helaman Field, I spied Aryel, a freshman in the orientation group I led, making her way toward me through the swirling sea of humanity. The stadium loomed above us to the north, and the eastern mountains towered over us in the moonlight. Under the field lights, the freshmen had been divided into groups of three, with each person taking a turn ordering the other two around. There was only one rule to the game: whatever the boss says goes.

People were running laps around the field with grimaces on their faces, just waiting for revenge on their bosses. Groups were having handstand contests and whistling competitions, some of them hopping across the field on one leg while patting their heads and rubbing their stomachs. A few couples were waltzing; other groups were doing cartwheels and somersaults. One guy was running around massaging the shoulders of anyone wearing glasses. I was wearing glasses.

Aryel dodged people on the field before she finally got close enough that I could hear her. “Hey!” she called (I was grateful to have a reason to get away from the shoulder massager). “Can I get your phone—”

A flash of Aryel’s blond hair and two more heads swished by the front of my face. Aryel was gone. I looked down to find her in a heap on the ground, tangled up with two other bodies. “Are you okay?” I asked as I hurried to gather her up from the soggy grass. “And do you know these people?” I asked. “No,” she said, laughing.

While attempting to keep a straight face, I scowled at the perpetrators, “Who told you to tackle my freshman?” The impish tacklers shrugged and pointed to a self-satisfied-looking guy who was standing still, chuckling to himself amid the other bizarre freshman behavior around him. He came over long enough to apologize (sort of), then the three of them melted back into the teeming game of do or dare.

Pulling grass and other debris out of her long hair, Aryel continued her question: “Can I get your phone number? I’ve had a lot of fun, but I am not going to be here for the rest of orientation, and I just want to stay in touch with you.” After I gave it to her, she headed back across the field with a couple of her friends—and I took the chance to breathe.

The past few days had been grueling. Three times a year, BYU hosts New Student Orientation (NSO), introducing thousands of freshmen and transfer students to campus. For the fall 2007 event, I joined the small army of student volunteers that makes NSO happen. Of the 300-plus volunteers, most of us were Y Group leaders, guiding groups of 25 to 30 new students through orientation.

On Tuesday of orientation week, my partner, Stephen, and I spent half the day in Y Group leader training. Armed with candy and NSO schedules, we went to the dorms Wednesday night to meet our group. We ended up getting pulled into an apartment where a group of freshmen had just finished rescuing some pumpkins from BYU’s zealous grounds crew, who had removed a pumpkin patch that was planted outside the building by last year’s residents. We discussed the merits of pumpkin pie made with real pumpkins, and the group invited Stephen and me to come back to make pies.

Since Wednesday, the freshmen in our group had tirelessly continued to probe their new surroundings, constantly offering us ideas and requiring answers as we walked from building to building and activity to activity. About campus: “Uh, this place is the . . . (check the Y Group leader booklet for help) Marigold Quad.” About the NSO advisement meetings: “Yes, if you know your major, declare it before you go on your mission.” About the holdings of the library during our tour of the biblio-behemoth: “I wouldn’t worry—there’s a pretty good chance the library has all 30 of the novels on your ‘fiction to read this year’ list.” About BYU’s best restaurants: “Definitely eat at the Pendulum Court before you graduate”—wait, I haven’t eaten at the Pendulum Court and I’m close to graduating. And about the mechanical engineering program: “Umm . . . talk to Stephen.” Stephen: “I’m an international relations major.” Then there was a lecture on academic strategy, an assembly about BYU traditions, and a lunch on the lawn. 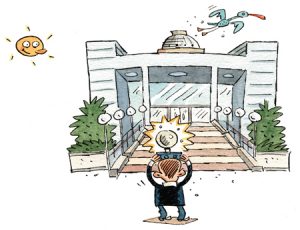 By the time our group walked onto Helaman Field for the Friday Night Extravaganza of field games, I was exhausted. Aryel had rescued me from the chaos on the field, and I wasn’t about to go back. Since I knew it would be over soon—and that Stephen, who was slightly more dedicated than I was, would shepherd any stragglers from our group to wherever they needed to go—I thought I would sneak out unnoticed.

I was walking back to my pile of stuff on the outskirts of the field, thinking about how nice Aryel was, when I heard footsteps behind me that escalated to a full pounding run. I turned around to see two guys racing toward me. One of them was laughing. The other, somewhat penitently, just said, “I’m sorry, but we have to,” as he grabbed my notebook, while the laughing dude yanked my bag out of my hands. They both took off running at full speed toward the group of gaming freshmen in the center of the field. I was a second behind them in a full sprint, screaming, “No, no, no, no, NO!” and elbowing my way through the sea of flailing limbs, all the while keeping my eyes glued to my yellow notebook, which bobbed up and down over the heads in the crowd. Eventually I caught one of them by the back of his shirt. I shook my head and put my hand out. When the director of the games announced over the speakers that it was the next person’s turn, the two guys gladly handed over my stuff. I hurried off the field so that I wouldn’t get hurt. Or hurt anyone else.

The next morning, a Saturday, I stepped into the service fair in the Wilk feeling groggy and was surprised to see so many of the same faces—still bright and smiling—that I had seen late the previous night on Helaman Field. The students’ arms were now full of pamphlets from organizations like Project Read, Tutor Outreach to Provo Schools, the Boys and Girls Clubs of Utah County, Teaching and Loving Children, and Friday’s Kids Respite. I stopped to listen to Shannon, a volunteer from the Center for Service and Learning who was staffing one of the booths. As I looked over her e-mail sign-up list, I was shocked at how many names were on it. “Is it always like this—do this many people always sign up?” 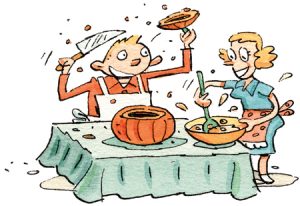 Shannon nodded and responded, “You know, freshmen are just more likely to be involved. We have way more freshmen who volunteer with the center. They are not as far into their majors—not so focused. They have a little bit more time, and they really just want to have new experiences and try new things.”

And in the middle of the Wilkinson Student Center terrace, surrounded by the dull roar of a few hundred students, I had a bit of a freshman moment. After spending two days with these new students, who are so eager to participate—to make friends or steal my stuff or tackle innocent people at will—I finally felt a prick of their enthusiasm. That old sense of exciting uncertainty rushed back, and it again seemed totally plausible that I could become a nuclear physicist or a firefighter or a Manhattan fashion designer. This year at BYU, I could make new friends, join a meaningful service project, play an unfamiliar sport, learn a new language, or pick up Celtic dancing. Just as it did for the freshmen, NSO gave me the chance to create a new beginning, to become more engaged with the world around me. If I chose to, it wasn’t too late—even as a junior—to be a freshman again.
Feedback: Send comments on this article to magazine@byu.edu.

For information about New Student Orientation and other programs for new students, visit fye.byu.edu.

Last Lectures: Parents to Their Freshmen

Change your sheets, live up to your name. See the parting advice parents gave dropping off the freshmen of 2016.