Election Study Gathers Inside Scoop on “Outside Money”

By spending unprecedented amounts of “outside money”–funds that are outside the candidates’ control and also outside the federal regulatory process–parties and interest groups have garnered more power over the agendas and outcomes of congressional races.

“We’re entering a whole new world,” says BYU’s David B. Magleby, principal investigator on the project. “This constitutes a shift from candidate-centered campaigns to campaigns dominated by interest groups. We have an increasingly unrestrained campaign system that is out of control in terms of accountability.” 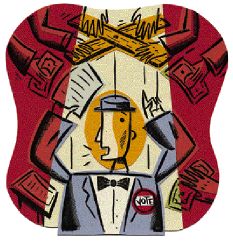 The study, initiated at BYU and funded by a grant from Pew Charitable Trusts, reports that political parties spent more than twice as much “soft money” in 1998 as they did in the last mid-term elections. The research also shows that spending for issue advertising–ads that promote a particular agenda or political issue–is increasing.

The trend concerns many academics because much of the spending is undisclosed and unregulated. “I think it’s a concern,” says Allan Cigler, a political scientist from the University of Kansas. “There is money being spent that has a material, substantive effect on elections, yet it is outside the regulatory process.”

Campaign finance laws attempt to control the amounts national parties can contribute to candidates. “Hard money” contributions–funds given directly to a candidate or used for advertisements that encourage voters to vote for a specific candidate–are limited by law and must be disclosed.

“Soft money” contributions, on the other hand, need not be disclosed. National political parties raise soft money for “party building activities,” which can include get-out-the-vote efforts and advertisements that discuss political issues or indirectly target an opposing party’s candidates.

And political parties aren’t the only ones injecting outside money into campaigns. Special interest groups often spend heavily to bring their issues to the forefront of competitive campaigns. Outside money is revolutionizing the way campaigns are run.

“This is a free-for-all,” says Magleby, a professor of political science. “I think the parties and the special interests both felt like, ‘Hey, all rules are off.’ It has made those who give soft money or fund issue ads much more powerful.”

To obtain an accurate picture of the overall campaign, university researchers and volunteers living within their districts monitored all election-oriented materials or contacts and entered more than 17,000 reports into a BYU database. They documented not only broadcast advertising–the “air war”–but also an extensive “ground war” of phone calls, mailings, and other grassroots campaigning. The researchers also interviewed campaign strategists, political reporters, and consultants from special interest groups and party committees. “Precisely because it’s party soft money and issue advocacy money, they were often not real forthcoming,” Magleby says.

While obtaining accurate information about grassroots efforts is often difficult, the information was important for understanding the dynamics of key races. In Nevada, for example, the AFL-CIO activated 30,000 volunteers to oppose a Republican candidate’s union views. “Labor unions did a magnificent job out here using the technology you have on the end of your feet–shoe leather–to turn voters away from the Republican candidate,” says Ted Jelen of the University of Nevada–Las Vegas.

The academic report showed that organized labor played a role in several key races across the country, with spending estimated at more than $23 million. Other special interests that were heavily involved in the 1998 campaign include Americans for Limited Terms, Planned Parenthood, the American Medical Association, Right to Life, the Christian Coalition, the National Rifle Association, and the League of Conservation Voters.

Protected by free expression rights, single-agenda groups face few campaign restrictions, which gives them tremendous agenda-setting power. These independent agendas often supersede the interests of candidates, says Penny Miller of the University of Kentucky. “I am alarmed by the amount of money that is being spent on behalf of candidates that candidates do not have control over,” she says. “Some of these groups may be promoting issues in a way that does not reflect what the candidates feel.”

Looking ahead to future election cycles, Magleby says the temptation to control the agenda will attract groups earlier in campaigns. “Interest groups have usually stayed out of primaries, but they may now be tempted to spend $3 million in an Iowa caucus or New Hampshire presidential primary on issue ads, dominating the air war and forcing every candidate to bow to their issue,” he says.

The report also shows that smaller races are receiving increasingly larger spending commitments from national groups. In Kentucky, for example, candidates spent about $4 million on their campaigns while political parties and issue groups spent more than $4.1 million on television buys. “That’s phenomenal for the state of Kentucky, where we only have 3.9 million residents,” says Miller.

The Kentucky race was also a prime target for soft money spending by the national Democratic and Republican parties. The report shows that this type of funding, previously seen only in presidential campaigns, is being targeted more strategically to competitive congressional races.

Increased soft money spending has had several implications for congressional races, the researchers report. First, it has increased overall spending and placed a premium on the purchase of radio and television airtime. The result in many states is a saturated media environment that can confuse voters.

Second, like issue ads, soft money ads tend to make campaigns more negative. Voter education commercials cannot promote a particular candidate, but they can warn voters against his or her opp onent. “The regulation encourages negative campaigning,” says UNLV’s Jelen. “If I want to say, ‘Vote for so and so,’ for example, that’sa campaign communication, that’s hard money. If I can, however, get the Democratic party to say, ‘My opponent is a slimebag,’ I can spend as much as I want. It’s much more cost-effective to say, ‘My opponent is sleazy’ than to say, ‘I’m a pretty good guy, vote for me,'” Jelen says.

Negative advertising also impacts voter participation, says Cigler. He notes that voter turnout was low in Kansas in 1998, even though its congressional race was the most expensive in history.

A third implication of increased soft money spending is that it tends to increase the power of national political parties. Jelen sees this as a positive development.

“Political scientists have long favored disciplined political parties, parties that actually stand for things,” he says, adding that the parties may now have more power to support those who truly represent their platforms.

The growth of non-candidate funding in the 1998 campaign also raises questions about the viability of campaign finance reform. Jelen believes the solution is fewer restrictions on candidate spending. “Most attempts to regulate it make it worse,” he says.

From Napkins to Emmys

This student's idea turned into an award.

Out of the Red Cell

A team of analysts were encouraged to think unconventionally and to identify weaknesses in U.S. defenses.