While Andrew J. Maxfield (BM ’06) was serving a mission for the Church in France, his uncle sent him A Timbered Choir: The Sabbath Poems, a book of devotional poetry by nationally acclaimed novelist, essayist, agricultural activist, farmer, and poet Wendell Berry. From the first few words on the page, Maxfield was awestruck. “That collection really resonated with me as a missionary,” says Maxfield, who felt drawn to the simple language and deeply spiritual nature themes—like these lines from “The Clearing Rests”:

We join our work to Heaven’s gift,
Our hope to what is left,
That field and woods at last agree
In an economy
Of widest worth.
High Heaven’s Kingdom come on earth.
Imagine Paradise.
O dust, arise!

Experiencing Berry’s poetry as a missionary inspired Maxfield to compose choral music for a few of Berry’s poems as his Honors capstone project while at BYU. What started out as an ambitious undergraduate project eventually turned into an enormous collaborative and artistic endeavor resulting in the 2013 two-disc CD set Celebrating Wendell Berry in Music, featuring choral and folk arrangements of a selection of Berry’s poems and new recordings of the poet reading his works. 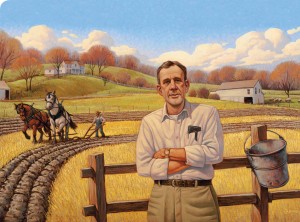 The album artwork for “Celebrating Wendell Berry in Music”, painted by Greg L. Newbold (BA ’92) depicts the esteemed poet on his Kentucky farm.

After graduating from BYU in 2006, Maxfield and his wife, Liz, pursued jobs and graduate degrees, but Berry’s words stuck with him. He continued to compose on nights and weekends, reading hundreds of Berry’s poems and whittling them down to a few dozen that would lend themselves well to music. “I spent a lot of time on walks with his poetry, just reading it out loud to myself,” Maxfield says, “trying to feel the innate rhythms of the words.”

Soon Maxfield began expanding the project, enlisting the Salt Lake Vocal Artists to perform his choral works on the first CD and Grammy-nominated singer-songwriter Eric Bibb to write and perform the music on the second CD. Even though they had never met, Maxfield approached Bibb after one of his shows in Chicago and told him about the Berry music project, giving Bibb a copy of A Timbered Choir. Bibb immediately loved Berry’s poetry and agreed to join the project. “Andrew’s a very focused and ambitious musician, and I recognized a kindred spirit in him,” says Bibb.

This combination of talents has created music as rich and varied as Berry’s own work, ranging from the smoky blues voice and guitar of Bibb to the crisp, clear notes of the a cappella Salt Lake Vocal Artists. “I wanted to create something that fans of Wendell Berry’s writing would love,” says Maxfield. “That means choosing instrumentation and voices that reinforce his earthy, simple, accessible language. And there’s nothing more organic than the human voice.”

That earthy, soulful quality of Maxfield’s music has produced surprising results. The album, which is available online and at multiple independent bookstores, has sold across the country and in Europe, and recently the Roosevelt Institute featured a performance of the music at their Four Freedoms Awards in New York City on the night they presented Wendell Berry with the 2013 Freedom Medal.

As the crowning triumph to this multifaceted production, Maxfield arranged for Wendell Berry himself to read the poems on the CD. Maxfield traveled to Berry’s family farm in Kentucky to meet his literary hero; in true Berry fashion, the poet recorded the readings at his own kitchen table, with his wife, Tanya, beside him. When Berry was done, Maxfield played recordings of the choral music for the Berrys. “He just leaned back in his rocking chair with his hands together and his eyes closed,” Maxfield says. “It was a really sweet moment.”