Dying for an Education 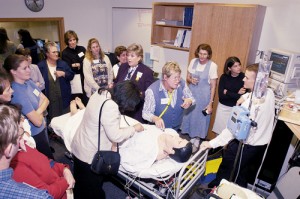 For Sam, the newest member of a growing nursing department, suffering daily through serious medical complications is just a part of the job.

ON Oct. 24 a new instructor was officially welcomed to the Nursing Learning Center in the Kimball Tower. His name is Sam, and if he weren’t lucky enough to be surrounded by nursing students who treat him free of charge, his medical bills would be enough to bankrupt his insurance company.On an average day, Sam may have several heart attacks, exhibit multiple personalities, contract pneumonia, and suffer severe head injuries. Though still young, he’s had several near-death experiences, and even died a few times. But for Sam—a Human Patient Simulator—it’s all in a day’s work.Named by the BYU chapter of the student nurses association, Sam (sometimes Samantha) represents the latest technology in health care education. His eyes open and close, he has a heartbeat, he inhales oxygen and exhales carbon dioxide, and with a little help from a microphone he talks to students.Patricia McArthur Ravert, ’74, director of the Nursing Learning Center, says students are already benefiting from working with Sam. “In the past, they’ve learned the principles, but we didn’t have a place where they could practice them with this degree of realism.”But this sort of realistic application also brings real stress, says Kirsten R. Harmon, ’03, one of Ravert’s teaching and research assistants. “The first time students use Sam,” she says, “they really get into it as if it were the real thing. But then after they use him more, the scenarios can actually become pretty fun.”Occasionally nursing students make mistakes, and in those cases poor Sam pays the price. “If Sam has a heart rhythm that’s not as it should be,” Ravert explains, “and then students don’t give him certain medications and maybe zap him with a defibrillator, he can go into cardiac arrest and die.”When Sam does die, the teacher calms the students and then reviews the entire scenario, asking them what they could’ve done differently. “The beauty of this is that you can then reset the simulator and let them run through it again and do it right,” says Ravert, who also uses these situations as a way to rehearse the difficult procedures surrounding a patient’s death, such as calling or meeting with the family and filling out the necessary paperwork.Drawing on funds from BYU mentoring grants, Ravert and three of her students are also using Sam to research whether teaching with a patient simulator like Sam increases a nurse’s ability to think critically and work better with patients. Though the study is not yet complete, Hanson is willing to guess what the results will be. “Sam helps bring everything we learn in class together in one experience,” she says. “He gives us more of the whole picture of nursing care and helps us prepare for serious emergency situations that we may face someday.”

Professor David Busath and student Doug R. Bretzing are part of a team that is cornering the influenza virus.

A Wave of Influence

The Stuff of Fluff

BYU researchers are unravelling the science of cotton.