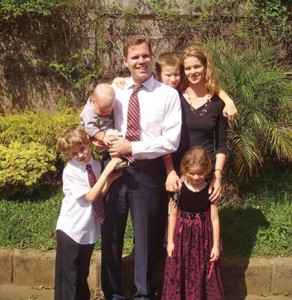 The Bohn family’s stay in Nicaragua opened their eyes to poverty.

As the chief of staff of Millennium Challenge Corporation, a U.S. foreign aid agency that seeks to reduce poverty, Matthew L. Bohn (BA ’96) is a leader in implementing long-term development programs in countries around the world.

“We focus on providing opportunities for the poor in a way that will increase income, create jobs, and grant better access to health care and education,” he says. “There’s no sense investing good money in a bad environment.”

Bohn’s missionary service in Argentina, his Latin American studies and business classes at BYU, and graduate work in international policy and practice prepared him for his previous Millennium position as the Nicaragua resident country director. For two and a half years, Bohn lived there with his wife and children as he oversaw development efforts. Bohn said the experience was eye opening for his children.

Bohn and his family also had opportunities to serve in the Church. He found building up the Church in Nicaragua just as meaningful as the efforts he made as agency chief.

“Poverty makes it hard to progress spiritually,” he says. “Without economic progress, it’s very hard for the Church to thrive.”