It is no secret that many longtime residents of the Escalante Valley have been peeved ever since U.S. president Bill Clinton set aside 1.9 million acres in southern Utah and created the Grand Staircase-Escalante National Monument in 1996. This aggravated the already existing tension, and since then, relationships between locals and the Bureau of Land Management (BLM) have been tenuous at best and downright aggressive at worst as disputes over cattle grazing and road management continue to flare.

“We have a conflict between the Old West and the New West,” Kane County commissioner Mark Habbeshaw told the Deseret News in March 2003. “We don’t want monument staff to determine our destiny.”

While archaeology isn’t exactly at the center of the conflict, BYU archaeology professor Joel C. Janetski, ’65, chair of the Anthropology Department, has sensed a tangential relationship. So when he took students to the Escalante Valley for an archaeology field school for the third year, he decided to address the issue head-on.

So during spring term 2003, Janetski decided to add public tours and community outreach to the traditional field-school experience. Looking back, Janetski and his colleagues feel they had a positive impact on community members, and students came away with an educational experience not often afforded budding archaeologists. 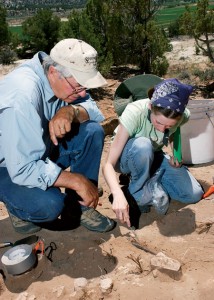 The primary purpose for spending eight weeks near Escalante, Utah, was to do archaeology. Surveys done by BLM archaeologist Doug McFadden over the last several years suggested that several sites in the area merited closer attention.

So students spent winter semester preparing for the dig, spring term working it, and fall semester analyzing their finds. A group of 16 students, seven student staff assistants, and four professors focused primarily on two sites. One of the more exciting discoveries for Janetski was confirming that one of the sites is Anasazi.

“We actually have an Anasazi occupation there in the Escalante Valley, right near the town of Escalante, which nobody realized before,” he says. Archaeologists have long known that Fremont Indians lived in the area as far back as 1,500 years ago. But the extent of Anasazi occupation, which came later, is less understood. So confirming a site as Anasazi is significant, and carbon dating of the houses found on the site will add a time frame to the occupation—critical information for better understanding the people who lived there.

For students, field schools are the traditional method for learning proper archaeological techniques and have been a regular part of BYU’s program for about 40 years.

Less traditional is the community outreach students participated in while in Escalante. The group organized public tours, bringing visitors by the vanload to the site from a local visitors information center. Led by students and shadowed by archaeologists, each tour included a stop at a display case, where students explained the history of the area and showed examples of artifacts being recovered.

Next visitors were led through the sites where students and archaeologists were at work. Tour guides explained the work going on and allowed visitors to shake screens, looking for bits of pottery and arrowheads to sift out of the dirt, or to watch closely as students gently unearthed larger buried artifacts. Some groups even rolled up their sleeves and stayed a while, working alongside the students.

“One young man came and dug with me for most of the day,” recalls Esther Bird Hatch, ’04, a senior archaeology student from Payson, Utah. “I really enjoyed having someone to sit and dig with and to point out differences about how to dig when you are doing archaeology.” She adds, “I also realized how much I had learned since I got there.”

Fellow student Aaron R. Woods, ’04, a junior from Provo, agrees that the tours improved his educational experience. “As archaeologists and archaeology students, we often lose people in a sea of jargon. It was difficult to break down our excavation and findings into simple terms,” he says. But, he points out, “the more you teach, the more you learn.”

As a professor, Janetski hoped for just these kinds of responses from his students. “It has always been my opinion that if students have to explain to people what they are doing, they will learn more,” he says.

“My perception is that people in Escalante may have viewed archaeologists as outsiders who come and take artifacts away and tell them they can’t touch things,” says Hartley. “We hope the tours and other outreach activities helped alleviate some of that.”

To measure community attitudes, two applied-anthropology students, Kate S. Campbell, ’03, and Timothy O. Matthews, ’03, administered questionnaires and conducted interviews both with visitors touring the sites and locals who had not been to an active dig.

“Their statements in interviews and questionnaire responses are really quite revealing,” Hartley says, pointing to a few examples that show the diversity of opinions regarding the dig: “The skeptical side of me says that an archaeologist thinks that there is an artifact under every sagebrush,” responded one local resident. Another visitor was more enthusiastic by the end of the tour: “A chance of a lifetime to see this!”

Hartley’s favorite example of public response comes from a student in a school class visiting the site. “One of the kids was complaining about the tour,” Hartley recalls. “He was complaining that he wanted to see bodies instead of just a bunch of lithics and sherds. But when he was complaining, he used proper archaeology terminology. So obviously he had learned something from the tour, even though he was making fun of it.”

Hartley acknowledges that eight weeks is a very short time to change a community’s attitudes. But the information her students gathered in their almost 300 questionnaires and interviews suggests that a better understanding of such attitudes can help archaeologists better work with the communities near their digs. 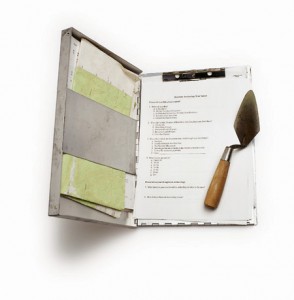 “From giving tours, I learned that there is a vital need for public involvement and awareness” – Aaron Woods

“If communities don’t understand the importance of the prehistory of their area, they will be more likely to disturb artifacts,” Hartley points out. “So if you raise their awareness of why it is important and how valuable it is to them as a community, not just to our general body of knowledge, you’ll be more likely to change behaviors.”

And getting students involved with public outreach during their earliest training as archaeologists gives them a mindset that they will take with them into other communities where they will work.

“I think the most important thing I learned from giving tours is that there is a vital need for public involvement and awareness in archaeological pursuits,” says Woods.

When all is said and done, the spring 2003 field school students may not have resolved the issues between locals and the feds over the Grand Staircase-Escalante National Monument, but a few visitors to the sites left feeling more like insiders than outsiders.

And it gave the students a new perspective, says Hatch. “It made me feel like what we are doing is important, and it was exciting to share that with people.”

Lisa Ann Jackson is the news editor for the Ensign and Liahona magazines.

Feedback: Send comments on this article to worksandprogress@byu.edu