Note: Megan B. Armknecht (’15), a junior from Lindon, Utah, won the $1,500 first-place prize in the Brimhall Essay Contest for Homecoming 2013, which this year honored its namesake, former BYU president George H. Brimhall. Her essay, one of nearly 150 entries, is printed below. The second- and third-place winners were Serena R. Johnson (BA ’13) from Everson, Wash., and Emalee E. Higginson (’16) from Allyn, Wash. Honorable mentions went to Alexander W. Barton (’16) from Manti, Utah; A. Kris Trevino Irvin (’15) from Draper, Utah; and Catherine A. Wilson (’16) from Newburg, Md. 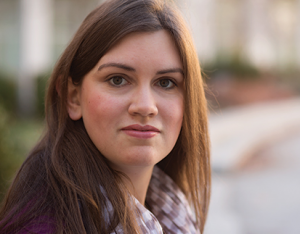 Essay winner Megan Armknecht honored George H. Brimhall and his vision to unite the sacred and the secular.

It was a hot, sticky June day, and I looked out in wonder at the majestic spires and rooftops of Cambridge, England, where I was attending Cambridge University on a BYU study abroad. I was fresh and naïve and just excited to be living my dream. Every day I was surrounded by stained-glass windows, British cafeteria food, and that familiar, musty smell associated with old books—the ghosts of the past. This was my first real adventure, and today was my first lecture in my romanticism class.

As we started analyzing allusions in the text, I noticed a biblical allusion and shared my observation. There was a cold, awkward pause. The professor tersely acknowledged the possibility of a religious allusion and then quickly moved on. I was stunned. The allusion brought clarity to the poem—my comment should have been given consideration. As the term progressed, I became more aware of the unique spirit of BYU. I loved my experience at Cambridge, but it increased my gratitude for the opportunity to study at BYU, where both faith and reason can be nurtured.

The BYU founders dreamed of creating an environment where the spiritual and secular could be united, where the entire soul could be educated. One man who particularly sacrificed for this ideal was George H. Brimhall. As the fourth president of BYU, Brimhall loved education and the gospel.

Under the tutelage of Karl G. Maeser, Brimhall learned the importance of integrating the sacred and secular. Brimhall believed that “faith is most secure [when] illuminated with reason.” He had a grand vision that BYU was to lead the world in all areas—academic, artistic, and spiritual. He lifted and inspired through kindness and counsel, ultimately helping students and faculty catch the vision of what BYU could be—a university where all truths are embraced.

Brimhall worked tirelessly to help BYU become a respected university. He encouraged academic discussion and debate, and he increased the size and scope of faculty. However, his zeal for progress sometimes led
to controversy. After hiring some well-liked and well-educated professors, Brimhall received word that their teachings were not in harmony with Church doctrine. Students even told him that they had quit praying because they had learned in school there was no real God to hear them. After much deliberation and prayer, Brimhall asked the professors to change their curriculum or be dismissed. The professors chose to leave, to the dismay of many. Some believed that Brimhall had killed all hopes of BYU becoming a credible university.

Brimhall’s decision was not popular, but it was courageous. He was loyal to his beliefs and did what he felt was best. He later said, “I would rather be a Moses on the mount with all of Israel against me than Aaron at the altar of the golden calf with all of Israel dancing around and praising me.”

Through his valiant actions in the preservation of spiritual freedoms, Brimhall created a firm foundation for the future of BYU. His courage, sacrifice, and devotion permeate the stone walls and well-worn walkways of campus. The spirit of Brimhall’s vision is not a ghost—for we are living his dream of what BYU could become. I hear it in the air when the carillon bells peal “Come, Come, Ye Saints.” I see it sweep across the student body during campus forums and devotionals. I feel it in quiet moments in the JFSB courtyard when I reflect on who I want to become. If we are truly meant to “lead the world” as Brimhall intended, we have to make our voices heard. Today is our season for courage. In a world riddled with moral relativism and half-truths, we at BYU have the wonderful opportunity to round out our souls through faith and reason—to have the education George H.
Brimhall dreamed of—and to stand up for what we believe and know to be true. Dreams are within reach, as long as we have the faith and courage to achieve them.

Like Abraham Smoot, India Johnson initially would have sooner gone to Hell than to Provo.

Susa Young Gates (fifth from left) was a steady servant for women, the Church, and BYU.