Class on a Canoe and Culture Too 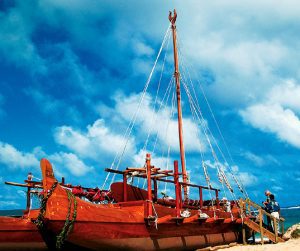 BYU-Hawaii’s recently launched Iosepa, a double-hulled Hawaiian canoe, will carry students to nearby islands as they learn about traditional Hawaiian culture and language.

ON Nov. 3, 2001, BYU—Hawaii launched the newest addition to its Hawaiian Studies program—literally.The Iosepa, a 57-foot, double-hulled Hawaiian canoe designed to be a “floating classroom,” was eased into the waters off Hukilau Beach in Laie, Hawaii, after a morning ceremony celebrating the completion of the canoe.Before helping launch the vessel, Elder M. Russell Ballard of the Church of Jesus Christ’s Quorum of the Twelve Apostles officially named the canoe Iosepa in honor of President Joseph F. Smith, his great-grandfather. President Smith was given the Hawaiian name Iosepa by the native community while serving the first of his three missions in the Sandwich Islands.Beginning in spring 2002 the Iosepa will carry students to nearby islands as they learn about traditional Hawaiian navigation, sailing, medicine, language, and other aspects of Hawaiian culture.The carving of the canoe was itself a lesson in Hawaiian traditions. Master carvers Tuione Pulotu and Kawika Eskaran spent nine months planning and building the canoe. Throughout the construction, students and community members under Pulotu and Eskaran’s supervision helped carve the hulls from gigantic dakua trees imported from Fiji. Other islanders came by to watch and help.“Nothing in my 35 years at this campus has generated more goodwill and feeling between BYU—Hawaii and the Hawaiian community than this project,” says BYU—Hawaii president Eric B. Shumway, ’64. Bill Wallace, director of the Hawaiian Studies program, agrees. “We’d be working and cars would drive up and people would bring us food.”“This canoe project has been both inspired and blessed from the beginning,” says Shumway. Shumway says that the Iosepa will help “teach the Hawaiian language and culture and instill identity, gratitude, and righteous aspirations in those who feel connected to the Hawaiian heritage.”