By Gordon Laws, ’00 ONCE a month for 48 hours, Paul R. Springer carries a pager—when it goes off, he heads to the hospital to counsel the family members of rape victims. “I have to help them realize it’s not their fault,” says Springer. A senior majoring in marriage, family, and human development, he has volunteered on the Utah County rape crisis team for three years. 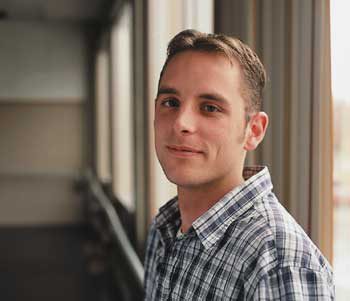 But seeing so many tragedies hasn’t dampened his hope for people and their families; rather, he feels a need to be involved. “I grew up in Detroit and had a lot of friends who came from broken homes,” says Springer, who moved to Orem during high school. “I thought that family therapy was one way I could help.”Springer’s interest in helping families has also led him into research—he worked on surveys for the “Inventory of Father Involvement” compiled by Alan J. Hawkins, ’79, associate director of the School of Family Life. In addition, Springer researched stories about divorced and non-custodial fathers for a Web site Hawkins and BYU colleague David C. Dollahite, ’83, maintain.“We have gotten comments from people who have looked at that particular module and said, ‘I really appreciated the stories and suggestions here,'” says Hawkins, who also employed Springer as a teaching assistant. “Paul brings all the people skills that are needed for our field as well as the intellectual, academic skills.”A deep concern for people underlies most of Springer’s activities. In addition to his research and volunteer work, he is a counselor in BYU‘s Financial Aid Office, where he helps students navigate through school.“He’s very personable,” says Todd M. Martin, ’84, a financial aid officer and Springer’s boss. “He’s able to talk about delicate issues in a sensitive way.” Springer sits on a committee that considers financial aid petitions for exceptions and unusual circumstances. “My bosses are used to me pushing for students,” he says. “I love telling students that they’ve been awarded money.”Springer also serves as president of BYU‘s International Folk Dance Ensemble, serving more than 180 students on both backup and touring folk dance teams. He attained the position a year after being chosen for the main performing team.“I feel like a missionary all over again when we go on tour,” says Springer, who served in the Brazil Salvador Mission. His favorite time in a show comes at the end, right after the group has done a high-energy Ukrainian dance with kicks and back flips. “We sing a medley of ‘Go Ye Now in Peace’ and ‘God Be with You Till We Meet Again,'” he says. “I think that’s the time where the Spirit really comes in and the audience can feel that we’re different from what they’ve normally seen.”Springer is looking beyond BYU to graduate school; he hopes to get a PhD. While he enjoys teaching and researching, “I mostly want to focus on clinical work,” he says, because he believes clinical work would best help him reach his goal of making a difference. “I’ve learned to have a lot of empathy for people,” he says. “I like seeing people change and be happy.”

“In many cases staying together is the best solution if the marriage becomes unhappy. . . . Of the people who said in 1987 that their marriage was awful, 87 percent said five years later that it was either very good or pretty good. . . . The marriages that were bad mostly became much better.”

Each Homecoming the BYU Alumni Association honors individuals or couples who have given outstanding service.