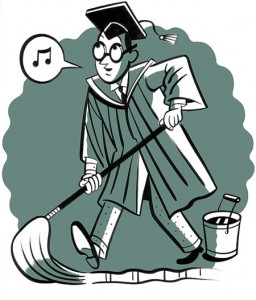 The stain seemed to originate from a leak in the ceiling. Water, maybe? The dark splotch lay right in front of the podium, distracting at least one student’s attention from the professor.

This account was included in a BYU research report about the hidden costs of an unkempt campus. Facilities and property management professor Jeffrey L. Campbell (BS ’84) surveyed more than 1,400 students from five universities who rated their school’s cleanliness and how it affected their learning environment. The results? Students who believed their classrooms were clean had higher GPAs and a better view of their university.

“A lot of people don’t necessarily get excited about cleaning,” Campbell says. “But the reality is . . . that cleanliness and orderliness do lend themselves to better academic achievement.”

The students surveyed indicated they learned best in the classroom, followed closely by the library. But while the library was rated as a good learning space—no matter how clean it was—students felt cleanliness greatly affected classroom learning. Campbell says this finding should guide universities when deciding where to focus their custodial efforts.

Different students also expect different levels of cleanliness, he says. If you’re a science major, chances are you require a cleaner environment than your arts counterparts. Freshmen? For whatever reason, underclassmen are less likely to notice a dirty classroom than their older peers. Gender was also a significant factor: women in the survey indicated they require a cleaner learning environment than men. Noise, temperature, and lighting also affected how students felt they learned.

Of the students who participated, BYU students ranked their campus as the cleanest—a nod to the university’s some 800 student custodial employees. BYU students also ranked cleanliness higher in importance than any of the other students surveyed.

Equipment manager Floyd Johnson has been a friend to BYU athletics since 1957.