Blue Students on a Red Planet

Everyone in the small town of Hanksville, Utah, believes in Martians. No Roswell-like attempt at a government cover-up here. In fact, Officer Tim Fingers from the Bureau of Land Management knows exactly where they live. “Here’s the dirt road they live on,” he says, indicating a dusty trail through the mountainous red rock. Sure enough, the road leads directly to a small colony in an otherworldly landscape—peopled at this time, actually, by blue students, not little green men. 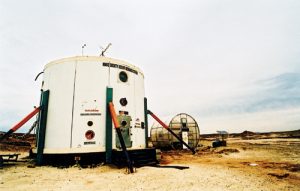 As Mars moved nearer to Earth, the closest it has been in 60,000 years, a group of BYU students discovered what it might be like to live and work on the Red Planet. Photo by Seth Smoot.

Built by the Mars Society in the middle of southern Utah desolation, the Mars Desert Research Station (MDRS) is part of an ongoing effort to prepare humans for exploration and possible settlement of the red planet, where, for the present, only robots roam. Students and scientists—like the BYU group—come from all over the world to live and work in an environment similar to that of Mars. “This makes a good simulation of Mars because it gets both really, really hot and cold, and there is dust everywhere,” notes P. Douglas Archer, ’04, a physics student and the executive officer of MDRS Crew 19, the official title of BYU’s expedition.

Self-described “custodio-nauts,” this BYU crew, under the command of physics professor David D. Allred, ’71, was asked by the Mars Society to clean up the station for future crews. “Since BYU is the closest major university to the project, the society has asked us to be caretakers of the facility,” says Archer. Besides general upkeep, BYU students provide a brief orientation to new crews.

The station—a two-story glorified-tuna-can habitat, lovingly termed the “hab”—can house a crew of up to 14 for two weeks. Accurately described as “small and cramped” by astronomy student Peter J. Brown, ’04, the hab still manages to be equipped with a few modern necessities—a kitchen, a bathroom, and a left-behind stereo and TV. A perilous climb on an emaciated ladder reveals the second floor with its very close, but still private sleeping quarters for the crew.

Appended to the main habitat is the “living machine,” an organic water filtration system designed to recycle wastewater. “We use a couple of different biological and chemical agents like specialized bacteria, plants, and sand to clean out the water,” physics student Nicole Farnsworth, ’05, points out. The resulting water is used for a wide range of tasks, though not for drinking. 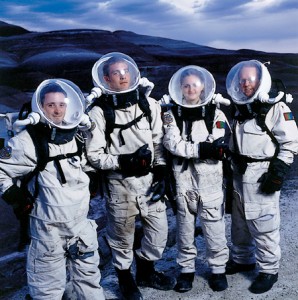 To add authentic Martian flavor to the experience, crew members only go outside dressed in custom-made space suits, and they wait 30 minutes in an airlock to simulate the pressurizing required for a jaunt in an unearthly atmosphere.

Tethered to the rest of human kind by a pair of ATVs and a satellite Internet connection, the only contact the crew makes with earthly kindred is through the Mars Society’s Web site. Online daily journals report goals and activities and share photographs. Although the BYU crew spends much of its time cleaning and repairing the station, which includes an observatory and telescope, they also conduct some research of their own. On their second day they observe a lunar eclipse, and during their stay they conduct research on short-period variable stars.

Serious scientific inquiry aside, the possibility for jokes is endless. Sci-fi humor is as common around the hab as the sand fleas. No one can resist making references to Star Trek, the X-Files, or even Buzz Lightyear, and Darth Vader’s mechanical asthma always seems to be within earshot.

But for adventurers and dreamers, this is more than just a fun science-fiction trip. “One of my dreams has always been to be an astronaut. I was excited to come out here and play spaceman for a while,” says Brown. “This may be the closest I get to it.”

More about the Martians

To learn more about the BYU crew’s involvement with the Mars Society, visit https://www.marssociety.org.

If you are interested in helping out or learning more about the Mars habitat, e-mail mars@byu.edu.