Beetles Are a Girl’s Best Friend 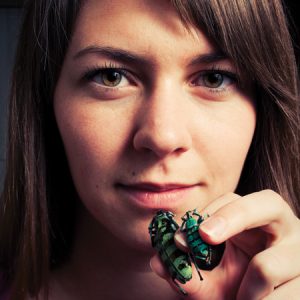 On physics major Lauren R. Richey’s (’12) desk is a tackle box full of brightly colored beetles from places as far-flung as Brazil and Indonesia. The tiniest has to be handled with tweezers, and the biggest is as long as a fun-size Snickers. “I don’t mind holding beetles unless I’ve seen them alive and had to kill them personally,” says Richey, who orders them by the dozen from an online retailer. “I guess that’s for the best. I’ve been touching a lot of them lately!”

Richey has discovered that certain beetles’ scales contain photonic crystals, difficult-to-create structures that could help scientists develop faster computers. These rare structures, which resemble the arrangement of carbon atoms in a diamond, manipulate light much like semiconductor materials manipulate electricity in computer chips. “I couldn’t believe it when I saw it under the microscope,” says Richey. “The photonic structure was so pristine, so perfect.”

Researchers have been looking for a way to make photonic crystals to use in computers that, hypothetically, would run on light instead of electricity. While actual beetle scales aren’t sturdy enough to be used in computers, the scales Richey has identified could be used as templates.

It seems remarkable that a mere undergrad could make such a discovery, let alone a then-teenager like Richey: she made the discovery while she was still a senior at Springville High School. “When she started out at BYU she was already doing graduate-level research,” says her mentor, biology professor John S. Gardner (MA ’76). “And this past summer, the work she was doing could fit into someone’s PhD dissertation.”

Thanks to an outreach program that allows a handful of teens to work with BYU faculty on science-fair projects, Richey met Gardner while she was in junior high, about the time she started racking up national and international science fair awards, some of them relating to her interest in light and photonics. During her junior year, she read an article that piqued her interest. “It had a picture of a big blue butterfly on it and said that maybe iridescent insects could contain photonic crystals,” says Richey.

“This area of research is something others had already started looking at,” says Gardner, “but Lauren’s the one who picked up this ball and ran with it.”

She approached Gardner with the idea to put a shimmery green beetle called Lamprocyphus augustus in a scanning electron microscope. Sure enough, the beetle’s scales contained the structure Richey had hoped to find.

As a college freshman, Richey had already coauthored an academic article about her discovery, collaborating with a grad student and a chemistry professor from the University of Utah. Since then, she’s published two more articles and produced more than 13,000 images of beetles.

Richey still works with her U of U collaborators.“None of this would be possible without them,” she says. Gardner has also continued to work with Richey as her mentor on a grant she secured from BYU’s Office of Research and Creative Activities (ORCA). With the ORCA grant, Richey is now looking at a family of beetles whose scales contain opal-like photonic structures rather than the diamond structures she studied initially.

“There’s so much that could come from something as simple as a beetle,” says Richey. “It’s incredible.”