Bad to the Bone

BYU researchers have a message for the growing number of runners considering “barefoot” five-finger running shoes: take it slow!

Their latest findings show that runners who transition to minimalist shoes too quickly suffer an increased risk of foot-bone injuries.

“Most people don’t think about that,” says exercise science professor Sarah Ridge, lead author on the study. “They just want to put the shoes on and go.”

The study, published in the journal Medicine & Science in Sports & Exercise, followed 36 experienced runners over a 10-week period. Half were asked to gradually transition into five-finger minimalist shoes—which now make up 15 percent of the running-shoe market. Following industry recommendations, they started with a 1–2-mile run in the minimalist shoes the first week, building to three 1–2-mile runs in week three, and then adding mileage as comfortable. The other half continued to run in traditional shoes.

MRIs conducted before and after revealed greater increases in bone marrow edema (inflammation causing excessive fluid in the bone) and more stress injuries in those who transitioned to minimalist shoes—particularly the women. 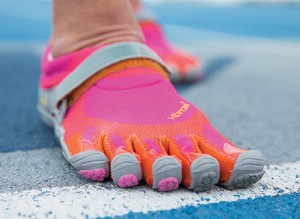 Are minimalist shoes bad for your feet.

“Whenever a bone is impacted by running (or some other repetitive action), it goes through a normal remodeling process to get stronger,” Ridge explains. “Injury occurs when the impact is coming too quickly or too powerfully, and the bone doesn’t have a chance to properly remodel before impact reoccurs.”

This doesn’t mean minimalist shoes are bad, say Ridge and her coauthors, which include BYU exercise science faculty A. Wayne Johnson (BS ’95, Phd ’07), Ulrike H. Mitchell (PhD ’05), and Iain Hunter (BA ’96, MEd ’97). But they suggest runners transition over a longer duration and at a lower intensity (miles per week). Future publications will establish clear recommendations for anyone considering making the switch.

“People need to remember they’ve grown up their whole life wearing a certain type of running shoes,” says Johnson. “They need to give their muscles and bones time to make the change.”

After decades of dreaming, a world-class gymnast turns to the luge to fulfill his Olympic dream.