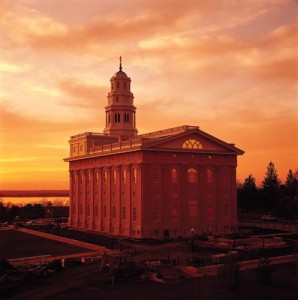 Just as the early Saints built temples they would have to leave, we also should live in the moment, but with an eye toward eternity.

We are asked to not merely pass the time but to improve every shining moment, for eternity is composed of such fleeting moments.

When Susan and I were in graduate school, we came to appreciate the wisdom embedded in three simple words from the Doctrine and Covenants: “as for years.” We embraced this phrase as we observed others in our situation who never truly unpacked and settled in. There is a strong temptation for young adults to look on their years in school or their first jobs as merely way stations toward a permanent job and home and hence to hold back. It’s easy for any of us to regard ourselves as simply passing through life, without making the effort—or assuming the risk—of putting down roots. Knowing this, I have found it salutary to recall the counsel the Lord gave in May 1831 to a group of Saints from Colesville, New York, newly arrived in Ohio. The Colesville Saints were eagerly anticipating a revelation on the location of Zion, where they intended to establish permanent homes. They knew that Ohio would be a temporary stopping point, yet the Lord told them:

I consecrate unto them this land for a little season, until I, the Lord, shall provide for them otherwise, and command them to go hence; And the hour and the day is not given unto them, wherefore let them act upon this land as for years, and this shall turn unto them for their good. [D&C 51:16–17]

“As for years”—I take this to be a D&C carpe diem. It invites us to seize the day, but with an eye toward the future. We are not merely to mark time in this life but, as the hymn suggests, to improve every shining moment, knowing that eternity is composed of such fleeting moments. To paraphrase Thoreau: You can’t kill time without injuring eternity.

I am persuaded that the commandment to “act upon this land as for years” was given for the benefit of Saints in every generation. It established a principle. Latter-day Saint pioneers would later act upon this principle as they built bridges, planted crops, and established settlements that they knew they must leave. Those in my parents’ generation likewise lived by the “as for years” principle as they participated in a post-WWII Mormon diaspora in which Latter-day Saints moved from the Great Basin back out across the country. The principle holds for every generation. When we act upon the land as for years, it turns unto us for good—whether our sojourn be long or brief.

I thought of the phrase “as for years” recently when a colleague in the prime of life died without warning. His death reminded me that we are all like the Colesville Saints, in that “the hour and the day” of our departure is not given to us. None of us knows when we will be called home or how long we will be in our current jobs, Church callings, or neighborhoods. Nonetheless, we are to live in the present “as for years,” rather than to be ever waiting for some future time and place to establish Zion.

Finally, a historical footnote about the Colesville Saints. As it turned out, their “little season” in Ohio was brief indeed—a mere six weeks! The owner of the property in Ohio reneged on his offer to consecrate his land to the Church. So in June the Lord commanded the Colesville Saints to take their journey to Missouri (see D&C 54:8), and off they trudged. Five days after they arrived, the Lord revealed that this was to be the land of Zion (see D&C 57). No doubt, they thought that this time they would live in their new home not just for years but for generations. They did not know that Jackson County, too, would be a temporary home. As would Nauvoo and Winter Quarters and even, for many, Salt Lake.

The Lord seems to want his people to be prepared, with equal grace, to build and leave temples, to accept both callings and releases, to live in the moment and for eternity. In this life the disciple must learn “to love that well which thou must leave ere long” (Shakespeare, Sonnet 73).

John Tanner is BYU’s outgoing academic vice president. This article is adapted from an essay published online at more.byu.edu/jtanner.

I direct your attention to a few of the many recently published books which recount aspects of the early pioneers.

BYU’s “Upper Campus” has enveloped and developed a square mile of farmland into a premier center for light and learning.