And the Grammy Goes To…

After Canadian opera tenor Thomas G. Glenn (BM ’99) sang the aria “Una Furtiva Lagrima” from Donizetti’s L’Elisir d’Amore at a benefit in San Francisco a few years ago, a woman asked whether he had always wanted to be a singer. He replied he actually had been intrigued with the idea of heart surgery and expressed some regret over not pursuing medicine. 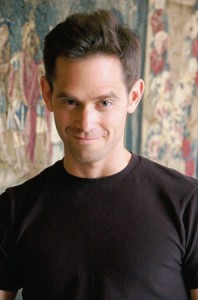 Thomas Glenn is a heart surgeon of a different sort—he heals with a Grammy-winning voice.

“But you are a heart surgeon,” she said. “You may not cut people open, but you heal people on a large scale—in an audience.”

“She was right,” Glenn says. “As I was singing I could see people being emotionally affected during the aria. I know music can change a person’s life.”

Glenn explains, “There is something singular about going to a live performance and being hit with a visceral human sound and realizing it is coming from a person opening their heart and soul. Singing is part of my identity. Whenever I have a blessed opportunity to sing, it is a reward in itself.”

Sometimes the rewards are even more visible. Glenn and several of his musical colleagues received a Grammy Award in February 2012 for the Metropolitan Opera recording of the contemporary opera Doctor Atomic by John Adams and Peter Sellars. Among other sources, the opera uses the text of once-classified documents to portray the moral crisis that faced a group of physicists who worked feverishly to develop the first atomic bomb.

Visibly delighted at the Grammys, Glenn gave the acceptance speech. After thanking everyone from the creators to the cast, he simply said, “I’m Thomas Glenn, and I’m an opera singer.”

That Glenn has found success in the opera world does not surprise at least one of his BYU music professors. “From the first time I met Thomas, I could see he was very intelligent and learned quickly,” says Lawrence P. Vincent (BA ’73) of the BYU School of Music. “He received our Singer of the Year Award my first year here. He is well read and articulate—just a bright person, in the top 2 percent. And despite a career that spans more than a dozen years, he remains approachable.”

Glenn grew up singing and playing the piano. He says when he figured out there were others competing in piano who were “much better and younger than me,” he put all his efforts toward voice. When he entered BYU he sang in Mack J. Wilberg’s (BM ’79) Concert Choir and Ronald J. Staheli’s (BM ’72) BYU Singers and thought he might eventually become a jazz singer. Following his mission, however, an opportunity to sing Bach’s St. Matthew Passion under the direction of BYU music professor Douglas E. Bush (BA ’72) forever changed Glenn’s musical focus.

“I was just home and gospel hungry,” Glenn says. “I played the part of the evangelist. I had to practice a solid two months to get it in my voice. It was an enriching experience—not just spiritually but also musically.”

Glenn adds, “Being at BYU made me a discriminating musician and helped fuel my love for opera, and for that, I thank my professors.”

After BYU Glenn believed he needed more training and perspectives, so he attended the University of Michigan for his master’s degree and Florida State University for his doctorate.

During his doctoral studies he was selected among hundreds of vocalists to fill one of 20 spots in Merola, an extensive opera training program through the San Francisco Opera. As a Merolini he sang the role of Almaviva in Il Barbiere di Siviglia and received the prestigious two-year Adler Fellowship. He debuted in 2004 and has since sung various leading roles in a number of operas. Additionally, his credits include the Metropolitan Opera, Lyric Opera of Chicago, Netherlands Opera, and English National Opera.

He says his dream—aside from being with his family, whom he misses dearly when he is on the road—would be to sing Mozart the rest of his life.

“I’m a Mozart addict,” he declares. “The more I sing Mozart, the more I understand about self, humanity, love, and beauty.”

Joseph FireCrow caught national attention when he was nominated for the 2001 Grammy Awards.

The annual women's conference is a place where women can bond together.