A Teenage Tale with Bite

What started as a vivid dream is now a dream come true for this mom and New York Times best-selling author. 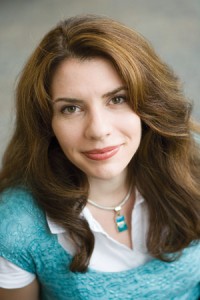 Two star-crossed teens stand in a wood-encircled meadow, talking intensely, obviously in love. While she is average in appearance, he seems without flaw, the sun sparkling on his perfect skin. It could be a dramatic moment plucked straight from Romeo and Juliet. But in this case the Romeo is a noble-minded vampire named Edward who struggles to resist the urge to sample the blood pulsing through Bella, the human girl he loves.When Stephenie Morgan Meyer (BA ’97) woke up on a June morning in 2003, she didn’t want to forget this vivid dream. But it was the first day of swimming lessons for her three young boys, and she needed to make breakfast, find swimsuits, and tend to other motherly duties. Nevertheless, she stole a moment to think about the two characters that had just emerged from her creative slumber.
“That morning, I got up and took care of the immediate necessities and then put everything that I possibly could on the back burner,” Meyer remembers. “I was so interested in the characters that for the first time since having my oldest son, I sat down at the computer and started writing.”
And she found she couldn’t stop. “I started out just so I wouldn’t forget the story, but I kept going. I really feel like it was a situation where I had a talent I was not using; I had buried it. And that was my kick-start. I was supposed to be doing something with this talent,” she says. “It sounds a little odd to say that you were inspired to write a vampire novel.”
But that’s what she did. The young couple in the meadow became chapter 13 of Twilight, a novel Meyer wrote over the next three months, mostly at night, when her boys were in bed.
Only six months after her dream, Twilight was accepted for publication by Little, Brown and Company. When it hit bookstores in October 2005, Twilight enjoyed supernatural success, landing on the New York Times bestseller list for children’s chapter books in hardback and paperback. It has been translated into more than 20 languages and optioned for a movie by MTV and Paramount.
The sequel has done just as well. When New Moon was released in September 2006, it immediately leapt to the top of the bestseller list and stayed at No. 1 for weeks. A third book, Eclipse, is scheduled for release in August 2007.
Meyer, who lives in Phoenix, began writing her characters’ stories for herself with no intention of publishing. “At the time I wasn’t doing any writing,” she says. “I was a stay-at-home mom. I had no plans for a career change.”
She still has her first career as wife and mother, and now she believes, “A true writer is someone who writes whether or not anyone else is going to read it.”
Expect more stories from this prolific author. After writing three epilogues to Twilight, each more than a hundred pages long, Meyer realized she wasn’t close to being done with her characters. “When you create a world like that—when you create Edward and Bella—if you stop writing, it’s like you’re killing them,” she says. “I couldn’t do that. I had to let them go on and see what was going to happen.
“There’s nothing better than getting to live in your world that you’ve created. And that other people believe in it too.” In September Meyer gave a presentation at the National Book Festival in Washington, D.C., where she mingled with authors, secretaries, ambassadors, First Lady Laura Bush, and Elmo.
When she recently visited BYU to sign books and meet fans—a group dominated by teenage girls—she described her unexpected success as an author.
“Sometimes I feel a little bit like an ambassador for people who want to write because I represent how lucky you can get,” Meyer says. “For most people it’s a really difficult journey—being published, writing your first book, getting out there. For me it’s been like a lightning strike, where I went from being a stay-at-home mom to all of a sudden, without much effort on my part, being a stay-at-home mom who also has a really great career writing. I like to be able to tell people that it can happen.”Read sample chapters and learn more at stepheniemeyer.com.