A Maze of Maize 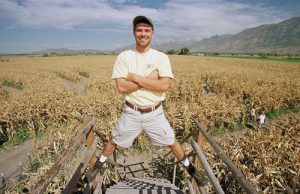 Brett Herbst and his team create more than 200 cornfield mazes a year.

Today corn mazes each fall are nearly as much a tradition as trick-or-treating or haunted mansions. But few people had heard of one 15 years ago when Brett W. Herbst (BS ’95) of Spanish Fork, Utah, spotted one in an agriculture magazine and decided it was an idea worth pursuing.

“My dad, an old rancher from Idaho, literally said, ‘You have rocks in your head!’” Herbst says. “People weren’t quite sure what to think. But I was really excited about it.”

Confident the local populace, heavy on college students, would take to a corn maze, the agribusiness major and business minor rented an old chicken farm in American Fork, Utah, planted a field of corn and, when it was ripe, started cutting paths through the field to create a maze of, well, maize, with human-sized pathways—the first such puzzle west of the Mississippi. 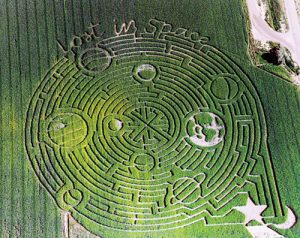 When the maze opened for business, the response from the community was resounding. “We had 18,000 people come in three weeks,” says Herbst. “We ended up having to close it down because there was so much wear and tear on it.”

Soon he started getting calls from people all over the country wanting to tap into his corn-maze-building expertise, and he founded The Maize, an “agritainment” consulting company.

Today, Herbst and his team, using computer-aided design, a sophisticated grid system, and lawnmowers, rototillers, and weed killer, have created 2,000 corn mazes in the United States, Canada, and Europe, now more than 200 a year. He also runs his own popular Utah corn maze, Cornbelly’s Corn Maze and Pumpkin Fest at Thanksgiving Point in Lehi. Each year he cuts the maze into a new design, sometimes the image of a local celebrity, such as David Archuleta or Larry H. Miller. In 1999 he set a world record for the world’s largest corn maze, an intricate image of the solar system and the words Lost in Space.

Kimberly Sessions from Providence, Utah, has visited Herbst’s corn maze with her family each year for 10 years. “Brett’s corn maze is an agricultural theme park,” she says. “There are so many interactive games and trivia cards, and he has a museum kids can go through and learn some things. Our kids have never lived on a farm, so it gives them a chance to be out in the crops and with the animals.”

Herbst says helping families learn about agriculture in a fun way is the best part of what he does. “Corn mazes have filled an entertainment gap that we didn’t even know existed,” he says. “People young and old have thanked me time and time again for providing a source of recreation that is clean, educational, and fun for all ages. It just seems to appeal to everyone.”

Special Collections has many treasures and reflections of the past for those seeking truth.

Cause of Migraines Found