By Greg Mortenson in the Spring 2010 Issue

The title of my book Three Cups of Tea comes from a Pakistani proverb that says when you share the first cup of tea you’re a stranger, with the second cup you are a friend, and with the third cup you become family. I picked the title in honor of Haji Ali, the Pakistani village chief who told me we would need three cups of tea if we wanted to accomplish things together.

In 1993, after a failed attempt to climb K2, I became separated from the group as we descended. After walking 58 miles, I wandered into a little village called Korphe. There I met Haji Ali, a stout, elderly man with a silver beard. I hadn’t taken a bath in 84 days, and my pants were ripped. He said, “Welcome to our village, but you do need to wash up a little, son, before you come to my house for tea.” 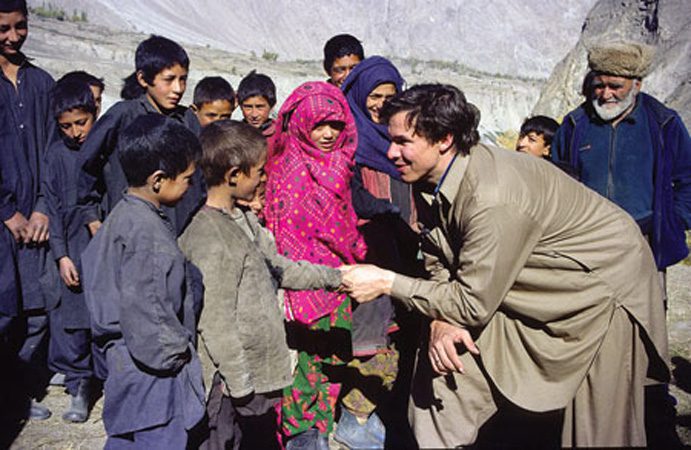 I stayed with Haji Ali that night and returned later to spend more time in Korphe. One day Haji Ali took me behind the village, where 82 children were sitting in the dirt—four girls, 78 boys—and most of the kids were writing with sticks in the dirt. This was their school. A young girl came up to me and said, “Would you help us build a school?” I said, “I promise I’ll build a school for you.” Little did I know that promise would change my life forever.

I had to raise $12,000 to build the school, and I had no clue how to do it. When I returned to the United States, I went to the local library and looked up the names of 580 celebrities. Then I typed 580 letters: “Dear Michael Jordan,” “Dear Sylvester Stallone.” Guess what happened? Nothing. At Christmastime I got one check back—from Tom Brokaw for $100.

I kept working; I was determined to get the school built. One day in 1994, my mother invited me to come to the elementary school in Wisconsin where she was principal. When I got ready to leave, a fourth grader named Jeffrey came up to me. He said, “I have a piggy bank at home, and I’m going to help you.” I didn’t think anything of it—what can a fourth grader do? Six weeks later, Jeffrey and his classmates had raised 62,340 pennies. It wasn’t celebrities, it wasn’t adults, but children who reached out to children halfway around the world.

I returned to Korphe a couple of times while we were trying to build the school. Over those years I spent a lot of time with Haji Ali.

Haji Ali loved to read in the evening. He would sit on his bed and hold books close to his eyes. But he read only two books; he read the Qur’an and he read Persian poetry. Often when he read I noticed he was quite sad and had a tear in his eye. So one day I asked Haji, “Why are you sad when you read?”

Well, we got the school built. And then we kept going. Since 1996, when the Korphe School was completed, we have established more than 100 schools in Afghanistan and Pakistan.

In 2001 Haji Ali died. I visited his grave in Korphe, and I thought, “How can I go on?” This man had become my mentor and my guide. And then I remembered that he had said, “When you are standing here and I am in the ground, listen to the wind.” So I listened to the wind, and in the wind I heard the voices of the children in the school, and I realized his legacy and vision had come true, through the education of his children.

This essay is adapted from a forum address delivered Oct. 27, 2009, in the Marriott Center. The full address is available in audio format at speeches.byu.edu.

This Hebrew primer will unlock the meaning in some common Biblical terms and enrich your scripture study.

Help and Healing for Families