By Gary Libman in the Winter 2001 Issue 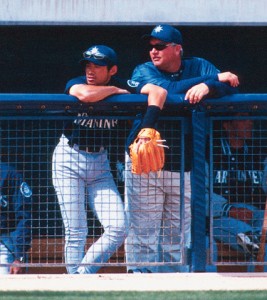 The Japanese that Ted Heid, right, learned on a Church mission has made him a key figure in recruiting such players as Ichiro Suzuki, left, to join the Seattle Mariners.

IN serving a mission to Japan for the Church of Jesus Christ in the mid-1970s, Ted W. Heid, ’80, unwittingly took a major step toward becoming a pivotal figure in the now-increasing flow of Asian players to American professional baseball.

When the Seattle Mariners learned that Heid, one of their talent scouts, spoke Japanese, they made him responsible for scouting Japan. “Until that point they liked me as kind of a baseball guy,” Heid says. “Then I made the fatal mistake of telling them I spoke Japanese, and it’s been a whirlwind ever since.”Continuing that whirlwind last winter, the Mariners promoted Heid to director of Pacific Rim scouting.As part of his work, Heid helped arrange for the Japanese hitting sensation Ichiro Suzuki and several other players to experience U.S. baseball during the Mariners’ spring training. Later Heid acted as interpreter in contract negotiations when Seattle signed Suzuki.Several months after Suzuki signed, Heid signed Chao Wang, age 16, who, according to Heid, is the first player from mainland China to agree to terms with an American team. Although the Chinese teenager is a pitcher—and all the Japanese players who have succeeded in U.S. baseball before this season have been pitchers—Heid expects many position players to sign with U.S. teams.“I absolutely expect the number of players from the Pacific Rim to increase,” says Heid, who majored in Asian studies and minored in Japanese and international business at BYU. “The mystique and concern about whether an Asian position player could succeed in America is being broken by Ichiro and also by the New York Mets outfielder Tsuyoshi Shinjo. Players in the Pacific Rim can see that these two are not only able to compete on the baseball field, but all the hidden inconveniences, the adaptation, such as language, food, and transportation—they are able to overcome those too.”Because Japan, Korea, and Taiwan all have professional baseball at some level, says Heid, the players from those countries “are closer to being a polished diamond than a lump of coal.”Last season polished players such as Suzuki and Japanese pitcher Kazuhiro Sasaki helped Seattle to the best regular-season record in baseball.Heid contributes to this success not from Seattle but from his two-story home in Glendale, Ariz.“As long as I have a major airport close by, the Mariners don’t care,” Heid says. “The fact that I’m right next to their spring training facility in Peoria gives them someone who can do a lot of other things at the facility. So it’s a win-win situation.”In his upstairs home office, Heid reads e-mails and polishes reports on players and activities in the nations he is responsible for. “Part of the intrigue,” he says, “is that you need to know what the other clubs are doing and who they are looking at in your area.”To get more information he travels to the Pacific Rim about two weeks a month from March to October and to Australia and New Zealand for about three weeks in January.“The Mariners are looking for the best players all over the world,” Heid says. “Wherever we have to go to find major league players, the Mariners are going to find them.”

Gary Libman is a freelance writer in Los Angeles.

It All Came Down to Baseball

After tallying up wins and losses this season between Utah and BYU, it's all come down to one game.

A Pitch for Awareness