By Erica Griggs in the Fall 2000 Issue 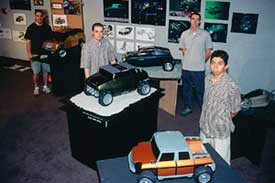 You could live in this thing. Pack water, food, fuel. . . . You could take what you need for a couple weeks and be fine,” says industrial design major Chris J. Nascimento about the Hummer he recently designed for General Motors. He says his Hummer is “a kind of technology survival vehicle.”Nascimento, an April 2000 graduate from Riverside, Calif., was one of 17 students who spent winter 2000 working with GM on a project to redesign the Hummer. Transportation design students typically do an industry-partnership project like this every semester, but the Hummer project was different, says Nascimento, who is now working for Lear Technologies. “Whatever we could imagine and think of and create, we could do,” he says.Classmate Dan C. Gifford, for example, catered his Hummer design to “the younger group, interested in coastal areas, extreme sports, water sports, things like that.” A senior from Las Vegas, Gifford decided to keep the Hummer’s bulkiness but make it more aesthetically pleasing. To do this, he beefed up the armored plating, tinted the windows, and painted it all a shiny, metallic Army-green.Originally designed for military use, the Hummer is built to go over boulders, across streams, and through mud, sand, and snow. AM General, the corporation that assembles the vehicle, began to market it to civilians in 1992. General Motors acquired exclusive ownership of the Hummer brand name in December 1999 and immediately enlisted BYU students to rethink it.“BYU‘s program has a good reputation in the design world,” says Clay Dean, design manager for Chevrolet and Hummer trucks. “This is a way for us to develop the talent that’s coming out of that program,” he explains. “Also, it’s insightful for us to see the point of view of young, college-aged customers.”According to Trevor Coppieters, an April graduate from Mapleton, Utah, the students were assigned to keep “the Hummer brand character, but still had the challenge of creating something totally unique and different.”They began by working in teams, and each team came up with a theme to help them generate designs. “Our team focused on how the vehicle could help us adapt to our different environments,” says Coppieters, who calls his Hummer “The Urban Assault Vehicle.” From there, the students began developing features that would make their vehicles distinct.Gifford, who is now working in GM‘s truck studio, calls his Hummer “The Hostile.” He says his favorite part was “coming up with the ideation sketches.” Indeed, he and the other student designers had some innovative ideas: reverse lights that eject to become temporary flashlights, a retractable rear hatch that transforms into a truck bed, a removable (washable) dashboard, vertical folding doors, and a convertible greenhouse-type roof with fixtures that send mists through the backseat on hot days.Once students had their Hummers laid out in their minds, they used computers to create three-dimensional wire-frame images of the vehicles and impose those images onto a grid. Then, Coppieters says, they transferred points from the grid onto foam blocks, from which they sculpted physical models, each one-fifth the size of a real Hummer. In April students displayed their models while representatives from companies like GM, Ford, and Chrysler came to see their work. 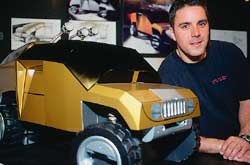 Sculpting his model (one-fifth the size of a real Hummer) was challenging but worthwhile for Chris Nascimento.

After several hundred hours of designing and building, students say the process was challenging. The most difficult part for Coppieters was coming up with his concept for a new Hummer. He says that his vehicle “evolved almost up to the finish.” For Nascimento, “The most challenging part of it was building the physical model, getting it so that it looks like a miniature car and the proportions are right.”Building the physical model was the easy part for Gerry D. Ayala, a senior from Irvine, Calif., whose Hummer looks like it might eat anything that gets in its way. Having already worked for GM building clay models from the sketches of other designers, Ayala saw this project as a chance to work on his own sketches. “Trying to represent all my ideas in drawings,” was the hard part, he says.But Ayala and the other designers agree that the challenges are what made this project worthwhile. “This semester has been one of the best learning experiences I have had,” says Ayala. “I’ve seen my potential,” he says. “Now I know what else I need to keep working on.”

Students should seek to establish habits of health, work, recreation and rest.

Ask an Expert-Discerning the Details

Devotion in the Details

A work once lost to the art world is now among the most prized holdings at the BYU Museum of Art.