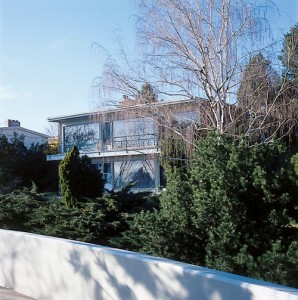 The quiet exterior of the Humanities Publications Center conceals the flurry of writing and editing that happens inside.

FROM the outside, the Humanities Publications Center, across from the Marriott Center, looks like an ordinary, homey split-level house. But a peek inside reveals tables instead of couches, magazines and books piled in the corners, and an enormous white-board with orange and blue notes scattered across it. In this cozy environment, up to 20 student publications are actively edited at any given time on topics ranging from creative writing to chemistry, from literature to legal analysis, from Spanish to science fiction.“Writing for a student publication was the capstone of my BYU educational experience,” says Scott D. Ashton, ’00. “You learn more when you write on your own than you do by reading what others have written.” Ashton’s article, which explores the Arab-Israeli conflict, appeared in Insight, a student forum for non-fiction writing. Now a law student at Stanford University, Ashton believes his authorship experience at BYU gave him excellent preparation for the legal world, which highly values writing skills.Insight and the other publications are produced almost entirely by students, from the selection and editing of submissions to the layout and design. Faculty advisors like Daryl R. Hague, ’87, who works with student editors on La Marca Hispanica, are available to give support and counsel, but the students make the calls.“They have a great deal of autonomy,” Hague says. “We don’t tell them what to publish. They make the selections. They do the work. They prepare it for publication. They get bids from publishing companies. They are the editors.”Xiaoyu Lin, ’02, a former PhD student in chemistry at BYU, authored her first solo article, about family law, in the BYU Prelaw Review. “In Chemistry,” says Lin, “most of the articles have multiple authors. This was a chance to develop my own original idea in a different subject.” Additionally, Lin believes that working with editors to prepare her article helped improve her overall critical reading skills. “I used to read for information only. Now I also read for the author’s main point and organization.”Linda Hunter Adams, ’63, faculty advisor to Inscape magazine, and co-advisor to The Leading Edge, enjoys watching students try out their own wings.“These students can do anything,” she says. “We don’t believe in people’s potential enough. It is astonishing what these students can produce.”According to Adams, student publication work allows student authors and editors to be better writers and researchers and, most importantly, to actively take part in the dissemination of knowledge and the creation process.“It’s like watching your baby come to life!” says Quinn W. Warnick, ’99, former editor of Inscape, a student literary journal. “Seeing for the first time a publication that you helped create is the greatest reward.”For Eric R. Carlson, ’01, former editor of Sigma, a student political science publication, editing has given him a fresh perspective on academic life, helping him to move from the theoretical to the more practical. “I now see that school was less about filling out bubble sheets and more about getting ideas out,” he says. “As an editor, you learn how an idea makes the journey from one person’s head, onto a page, and into the minds of several readers. It’s very exciting.”