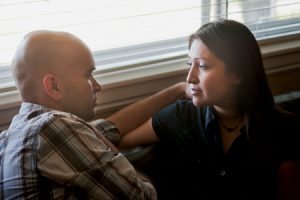 When asked how they’re doing with five strategies that BYU researchers say help families thrive, Dave (BA ’81) and Cindy Settle Sandberg (’81) can’t help laughing. Married for 30 years with three grown children, they feel they fall short on some of the five principles—kindness, forgiveness, commitment, self-sacrifice, and avoidance of relational aggression. They do say they’re not relationally aggressive, and they have been unflaggingly committed to one another and to their children through their share of bumps on the road.

“You have to be committed to the relationship,” says Cindy. “You might not always feel committed to the person—sometimes the person is not someone you want to be around for awhile. But the idea of marriage and family is much bigger than how we individually feel at any given moment.”

Randal D. Day (BS ’73), lead re-searcher on the study and professor of family life, says commitment is perhaps the most important of the five principles, but the other four are not far behind. Since 2007 Day and his colleagues and students have been scrutinizing nearly 700 families in their “Flourishing Families” study. “We’re finding over and over again that the five key values, what we call ‘sacred living strategies,’ are so powerful. They’re just huge,” he says.

Dave Sandberg agrees with his wife, Cindy, that commitment has been the single most important factor in keeping their family unified and strong. “It’s the glue around which the other attributes can work themselves out,” he says. “The chance to forgive comes because you’re still there after an eruption or clash. You can then learn to be kinder and more forgiving.”

Day says that highly committed families like the Sandbergs can weather almost any challenge. “Committed families basically say, ‘I’m in this for the long haul. I don’t consider my spouse to be temporary, and I’m not reconsidering all the time. I’m with this person for better or worse.’ When people think that way, it’s marvelous. It’s key.”

According to Day and his team’s re-search, spouses who forgive one another create a bond that can withstand serious stresses and strains—even problems that might mean divorce for many. But seeing yourself as forgiving isn’t enough.

“Your spouse has to see you as a forgiving person too,” says Day. “You might think you’re forgiving, but do other people see you that way? Unless that’s a shared reality, it doesn’t work very well.”

Cindy thinks that insisting you’re forgiving in the face of contradictory opinions can be selfish: “If I see myself that way but my spouse and my children don’t agree, then I’m just persisting in a view that serves me without actually considering another human being—like being content to offer a Band-Aid and never checking to see if the person is still bleeding.”

In the study kindness emerged as another important predictor of success in family relationships. Day believes that being kind is a choice we make to interpret others’ motives in a benevolent way. If one spouse breaks a dish, for example, the other spouse has options about how to explain that event: “She’s so careless” or “She must be tired; maybe I can help.” Day says that behaving kindly shows that we think others are valuable. “Unkindness usually reflects an idea that we think others are stupid, careless, annoying, or unimportant,” he says.

The Sandbergs believe it’s important to make a distinction between being “nice,” which they think sometimes covers for unkind feelings, and being kind, which comes from a deeper place. “Kindness requires much more of a transformed heart,” says Dave.

Sacrifice means foregoing something that’s important to benefit someone else—and following through. Parents should lead the way, but children should be expected to sacrifice as well. Cindy says the principle is alive in her family: “I don’t wake up thinking, ‘I’m looking forward to sacrificing today, and I want to sacrifice.’ Instead, I wake up and think, ‘I have this problem in the family that I need to deal with, and I’ll do what I need to to resolve it, even if it means I have to give up something I want.’”

Sometimes what we need to sacrifice are our preconceptions about what we think our spouse or children ought to believe and how they should behave. Dave says his own journey with his family has taught him to give up his fixed ideas: “When you get married you start with, ‘We’re a family and we all share the same script.’ But as family life evolves, there’s this fortunate bumping into reality that tells you that, no, actually, everyone has their own script. If you get stuck in believing only your script is the right one, you stunt your growth and your spouse’s and your children’s.”

Relational aggression includes such behavior as the silent treatment, withholding affection, and social sabotage—a spouse telling other people that “Bob is a jerk” or “Barbara is a nag.” Day says that relational aggression goes beyond being unkind—it is purposefully cruel. “People who do this are utterly destructive. It’s so acidic to relationships. It kills them.”

When parents are relationally aggressive, children tend to follow. Girls who see one or both parents turn a cold shoulder when they disagree or enlist allies during conflict often develop “mean girl” syndrome, says Day. “In the mean girls’ arena it would be, ‘You’re not coming to my birthday party.’ In adult life it’s ‘He ignores me when he’s angry’ or ‘She calls my mother to get her to change my mind.’”

As Day and his colleagues study these five sacred strategies, they’ve found that they trump “ritually” good behaviors. Truly living the principles has a greater impact on marital quality, stability, and intimacy. “If you go through church meetings but you don’t allow what’s being taught to go through you, what’s the point? If you’re not actually working on being kind and committed and sacrificing and forgiving, then you’re not getting it. You’re not letting the principles transform your soul,” says Day.

If you worry that you might just be going through the motions, Day suggests self-assessment as a first step. “Are you just a bumper-sticker Christian who can spout all the cliches, but you’re short-tempered with your children and try to dominate your spouse and are constantly judging others?” If so, he says, you probably haven’t focused on transformation yet, which means living the principles, not hearing them only.

Second, says Day, the five strategies are mostly skills, and a person can improve with practice. “Like it says in Alma 32, your faith in a principle grows by trying it out and practicing it.”

Third, Day suggests family members be intentional about their relationships. “Intentional means that we are not casual or uncaring. The intentional partner carefully tries to be a better spouse or parent. The casual partner just lets things happen and reacts in whatever way pops out.”

The Sandbergs say they are intentional sometimes but they hope to improve after learning about the five strategies. “We appreciated the opportunity to assess our relationship in light of these concepts, especially to see how valuable it is to contemplate how others perceive you. We can already see how that helps us to be better spouses and better parents—and for our lives to be enriched and expanded.”

Beginning in 2005, Randal D. Day (BS ’73) and several colleagues discussed their wish to investigate family life differently. Research often relies on reports from one family member, usually the mother, and most starts with a “deficit model”—asking what causes families to unravel. Instead, BYU researchers wanted to explore keys to success. Rather than rely on telephone interviews or surveys mailed to families, they are conducting in-depth, in-person interviews with three members of each family—father, mother, and one child of about fifth-grade age (in the case of single-parent families, one parent and one child).

The team, which has included more than 550 students so far, began in January 2007 with a randomly chosen community sample—500 families in the Seattle area and 180 in Utah Valley. Students enter subject homes to conduct lengthy interviews and record video of family interactions.

The daily work of families—the ordinary hands-on labor of sustaining life—has the power to bind us together.

God knows you. He understands you. He loves you.