For 50 years BYU–Hawaii has created leaders for the Pacific and Asia.

One man said the world needs men who cannot be bought or sold, men who will scorn to violate truth, genuine gold,” said President David O. McKay, his white hair reflecting in the sunlight that streamed through the mostly overcast sky. “That is what this school is going to produce. More than that, they’ll be leaders. Leaders! Not only in this island, but everywhere. All the world is hungering for them.”

Standing on a wood stage erected in a sugar cane field, President McKay, of the Church of Jesus Christ, unfolded his vision of the school for which he was about to break ground in Laie, Hawaii. To the approximately 1,000 people gathered at the ceremony, he prophesied that the Church College of Hawaii–later renamed BYU–Hawaii–would be a blessing to the world. “From this school . . . will go men and women whose influence will be felt for good towards the establishment of peace internationally.”

That was Feb. 12, 1955. Now, 50 years later, that prophecy, widely known and quoted on the Laie campus, has become a motivating theme for the university. Since 1955 more than 9,500 graduates from more than 60 countries have earned degrees at BYU–Hawaii, and many have returned to their home countries to serve as leaders in business, government, and the Church–particularly in Asia and the Pacific. As the school celebrates its jubilee year, it is accelerating its efforts to create leaders for the world.

It all began with a flag ceremony.

In 1921, on a yearlong worldwide tour of Church missions, 47-year-old Elder David O. McKay, then of the Quorum of the Twelve, journeyed to Laie on the northern shore of Oahu in the Territory of Hawaii. Laie was a rural community comprising people of many cultures. It had been home to Church members from Hawaii, other islands of the Pacific, Asia, and other parts of the world since 1865, when President Brigham Young authorized the purchase of the land and designated Laie a gathering place for Saints from the islands of the Pacific. 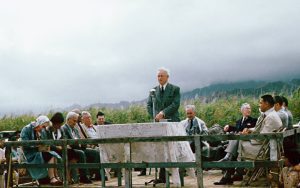 President McKay speaks at the groundbreaking for a Church college in Hawaii. Now in its jubilee year, BYU-Hawaii is accelerating its efforts to fulfill President McKay’s vision for the school. Photo by Lee Cantwell.

On Feb. 7, 1921, Elder McKay wrote in his journal: “I went over to the [elementary] school which is conducted under the direction of the Mission, and witnessed a most impressive and inspiring site. One-hundred and twenty-seven little children . . . formed in order on the lawn, and then marched to the flag pole and participated in a flag raising ceremony.”

Of watching the students from Hawaii, North America, Japan, China, Portugal, and the Philippines stand, sing, and speak together, Elder McKay wrote, “my bosom swelled with emotion and tears came to my eyes.” He said he was moved to see the children participate “as though they all belonged to one nation, one country, one tongue.” Elder McKay saw this as a model of the unity the gospel of Jesus Christ promises. After meeting with members and missionaries, he felt inspired to recommend that a Church school of higher education be built in Laie.

Thirty-four years later, and seven months after the groundbreaking, the college officially opened with 153 students. President McKay’s instructions that day, delivered in a letter, included the following: “The students must . . . be led to feel that the most important thing in the world is the Gospel and that the observance of its principles in their lives brings happiness and joy in this life and further progress and exaltation in the life hereafter; and, secondly, the college must be fully creditable in all its instruction and activities.”

Today BYU–Hawaii has grown into its prophesied stature, academically and spiritually. It is consistently included in rankings of top U.S. colleges. For example, U.S. News and World Report has placed it in the highest tier of best comprehensive baccalaureate colleges in the western United States since 1999–ranking it fourth this year. In 2004, Consumer’s Digest identified BYU–Hawaii as the number-one value in private higher education in the United States (BYU was second in this same listing.) 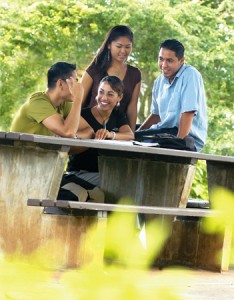 And yet, students say, to walk on campus is not to sense cultural diversity or educational value but to feel part of an ohana, or family–no matter where they are from. Palm tree stands and the tropical climate add to the ambiance, but they say it is the openness, warmth, and friendliness of the people and its consecrated role as a place of gathering that define the university. In that sense, the underlying strength of BYU–Hawaii is the same as that which Elder McKay witnessed at the elementary school flag ceremony 84 years ago.

Despite the overwhelmingly positive experience today’s students have at BYU–Hawaii, President McKay’s vision for the school reaches beyond their time on the campus to their influence as leaders after they graduate. To fulfill the prophetic mandate, the university has sought ways to help students successfully return to and build up their home countries, taking their learning and the spirit of the university with them.

“I love the ‘aloha spirit’ in Hawaii; it feels just like home,” says George Tinkorang (BS ’04), a former BYU–Hawaii student from Ghana. He recently started a master’s degree program at BYU in civil engineering. After finishing at BYU and gaining some on-the-job experience, Tinkorang, his wife, Millie, and their son plan to return to Ghana. “To whom much is given, much is required,” he says. “I think that is the most important lesson for me to take back.”

To help international students like Tinkorang return home after graduating, BYU–Hawaii has created several initiatives that improve what has been dubbed “return-ability.” Fostering return-ability–the overall readiness of students to not merely return to their home regions but also to have the wherewithal and connections to succeed when they do return–is a campuswide commitment at BYU–Hawaii.

BYU–Hawaii president Eric B. Shumway (BA ’64) called the effort “a reaffirmation of the international mission of this campus–a mission that stresses a stronger commitment to preparing men and women to be leaders.”

A major thrust of this emphasis has come in the form of international internships, which allow students to gain practical experience while making connections in their home countries. In the past a major challenge for many students interested in internships in their home countries was the prohibitive cost of travel. Thanks to the generosity of donors, this hurdle has recently been overcome through a travel fund for qualifying students. The university has also set up extensive networks throughout the Pacific Rim to help students identify opportunities in their home areas. The result of these efforts has been an explosion in international internships, a four-fold increase over just two years.

One who benefitted from these changes was Filipino student Iris Cabrito. When, as a new student, she boarded a plane to travel to BYU–Hawaii, her father had counseled her to “come home after gaining an education.” These words have stayed with her and guided her in her education. And an internship at a commercial bank in her homeland cemented her commitment: “Interning helped me want to come back home more–to help my people, not only in industry but also in the Church.”

This desire to share what they’ve learned academically and spiritually motivates many students. Jonathan Prasad, a native of Fiji and a recent graduate of BYU–Hawaii with a bachelor’s degree in mathematics, says of his time in Laie: “Beyond the nice place and Church on Sundays, for me the greatest benefit of a Church education has been to tie principles learned from the classroom with those of the gospel. Gospel principles are even in math–it is all knowledge from our Heavenly Father.” Prasad plans to return to Fiji. “Given the chance to go home, I think in a small way I will be able to contribute through callings in the Church or just being myself.”

Recent graduate Ariunchimeg Tserenjavin successfully made the move back to her home country, Mongolia. After winning a BYU–Hawaii business-plan competition and with help from a donor, Tserenjavin created Ariuna’s Cashmere, a clothing manufacturing company. She has decided to keep the shop closed on Sundays–allowing Latter-day Saint employees to attend Church and hold callings.

This year, as BYU–Hawaii commemorates its prophetic founding and first 50 years with a golden jubilee of pageants, parades, and memories, much of what it celebrates are the things that haven’t changed since the school opened with 153 students in the fall of 1955. President Shumway has noted, “More important than external assessment, as President McKay foresaw, BYU–Hawaii continues to produce ‘genuine gold’–young men and women of quiet moral character who have interacted with peers from around the world and are returning home to be leaders in their families, communities, careers, and the Church.”

Brad Olsen, of Lehi, Utah, is a senior communications specialist with LDS Philanthropies, the Church department that is responsible for fund-raising for BYU, BYU–Hawaii, and other Church institutions.

How many pounds of tater-tots does it take to make a BYU Magazine cover?