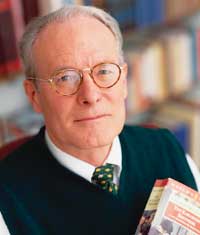 A Russian professor who served as the first LDS msision president in the former Soviet Union, Gary L. Browning is known for his integrity and his efforts to promote peace.

His Russian is excellent. Grammatically better, his wife has been told, than that of many native speakers. But perfect grammar isn’t what took Russian professor Gary L. Browning to Europe in 1990 with an assignment to open the first LDS mission in the former Soviet Union. A far more important qualification, Joan Browning says, was her husband’s love for Russians.

“He has always loved the Russian people and wanted so badly for other people to love them too and to understand them,” she says. And because he really saw the Russians as his brothers and sisters, she adds, Browning never considered them enemies.

A native of St. Maries, Idaho, Browning came of age during the Sputnik era, and he studied Russian during his second year at BYU. After an LDS mission to Finland, he traveled briefly in Russia, where “I felt very close to the Russian people and very much at home,” he says. Intrigued by Russian literature and architectureand by the warmhearted people he metBrowning decided to major in Russian when he returned to BYU in 1963. Thirteen years later, after a BA from BYU, a master’s degree from Syracuse University, a PhD from Harvard, and two years on the faculty at Bryn Mawr, he joined BYU’s Russian Department.

Russian professor Donald K. Jarvis says that Browning was one of the first American academics to have extensive resident experience in Russia during the height of the Cold War. In 1969 Browning and his family lived in Moscow for six months while he worked as a guide for a United States Information Agency exhibit there. And in 1973 he again spent six months in Russia while researching for his PhD dissertation.

Since then Browning has returned to Russia dozens of times. “And each time I’ve been even further enamored of Russia,” he says. “I love peoples and cultures around the world, but perhaps I know Russians best, and I really enjoy their thinking, their aesthetic sense, the tremendous human potential they have.” His top-floor JKHB office is decorated with art from Russia, including a matryoshka doll set that represents Russian authors and several religious icons, which he loves for their beauty and spiritual intensity.

“My heart breaks for the difficulties Russians are experiencing,” he says. “I keep thinking that perhaps most of those are behind them, and then new ones occur. So it’s a very great struggle. But in many ways it’s suffering that has made them what they are, made them so inspiring, so courageous, so determined, so resilientand so appealing to me and to many others.”

When his mission call came, Browning had been publicly advocating a more sympathetic attitude toward Russian people for nearly a decade. During the 1980s, when anti-Russian sentiment was pervasive, he felt compelled to counter the prevailing hostility. So he founded a Utah County chapter of Utahns Against the Nuclear Arms Race, guest-edited an issue of BYU Studiesthat focused on peace, advocated peace in an article for BYU Today,lectured about Russia for the Utah Humanities Council, pursued training in peace studies, and taught a BYU course on peace.

“I was reading the American press and the Soviet press, living in America and travelling to Russia,” Browning says. “On both sides there was a tremendous amount of distortion of the other’s position and a willful inclination to be inaccurate and unfair in portraying the other side’s point of view. And so we tried to provide information that we considered more evenhanded.”

But speaking positively about Russians during the Cold War made Browning more than a few enemies.

“It took real courage to say that when he did,” Jarvis says. “And just a few years later it was clear that Gary was sort of vindicated when Communism fell and he was able to go in and become the first mission president. He already had a track record of wanting to find commonalities rather than to just destroy the Russians.”

For the first two years of their mission, the Brownings and their three youngest children lived in Helsinki, Finland, while their missionaries labored in Estonia and Russiawhich meant that Gary was often away from home. “He faced unique challenges at that point,” Joan says. “Very little was translated, so he was trying to get materials for Sunday School lessons, plus trying to find places for the church meetings and for missionaries to live.”

“Gary had to buck a lot of Russian bureaucracy,” says Jarvis, who himself served as a mission president in Russia from 1996 to 1999. “I asked him how he did it, and he said, ‘My motto is: Never get angry, and never give up.’ He was an excellent one to be a first mission president therealways diplomatic, always unflappable. He never alienated people but eventually in many cases got his way because of his polite persistence.”

Failing eyesight was another of the challenges Browning faced on his mission. Always severely nearsighted, he feared he might lose his sight before the deterioration of his eyes was stopped by leading Russian doctors. “He trusted his precious eyesight to them,” Jarvis says, “and they performed some very innovative surgery. He was able to continue the mission without ever leaving. This again shows his trust in the Russian people and his willingness to take a risk.”

Literature and Justice for All

Since he returned to campus in 1993, Browning’s teaching responsibilities have been heavier than ever. “Suddenly we had gone from 150 students to 500 students taking Russian,” he explains. “Ours is the largest undergraduate Russian program in the country, and I think its quality is among the highest as well. Partially that’s due to an outstanding faculty. But even more important it’s due to the returned missionaries.”

Browning specializes in teaching literature classes, including seminars on Tolstoy and Dostoevsky, whose novels attract him because of their focus on moral and philosophical issues. “I think Dostoevsky has taught me more than any other author of fiction,” he says. “And the work I feel is endlessly powerful and renewing and enlightening is his novel The Brothers Karamazov,which I read and refer to with enormous pleasure and stimulation.”

Not surprisingly, peace remains one of Browning’s academic themes. “The dream I have had is that this university would be known for its fine graduates in conflict resolution,” he says. “They may be in political science, law, family studies, or any number of other disciplines, but they would have among their many areas of capability the strength of being able to address conflict from the perspective of principles taught in the Sermon on the Mount.”

Indeed, Browning’s sense of justice is as refined as his Russian grammar. “He’s unbelievably fair,” says German professor Alan F. Keele, one of Browning’s longtime colleagues. “He has the most highly developed sense of ethics and right and wrong of any person I have ever met.”

Browning has actually spent much of his career in the pursuit of fairness. As director and then dean of BYU’s honors program in the late 1970s and early 1980s, he envisioned and implemented the change from an apply-at-entry, membership-only program to the current system, under which any interested student can enroll in an honors class, and any student who completes the requirements can graduate with honors. Browning considers his honors program work one of the highlights of his career.

Now in his second term as chair of BYU’s Department of Germanic and Slavic Languages, Browning is known for his administrative integrity and diplomacy. “You can count on Gary never to sweep anything under the rug,” says Keele. “If there are two sides to the issue and he’s advocating one side, he will also tell you all the good parts of the other side.” That integrity also means Browning holds himself to the highest standards in his teaching”He never cuts corners in his classes in terms of preparing,” Keele says. “He never wings it.”

And his peers trust Browning’s judgment. Keele recalls, “When I was department chair and Gary was mission president, I wanted to hire some people for the Russian section. And the other Russian faculty said, ‘We can’t hire somebody without Gary.’ And I said, ‘Well, he’s not herefor three years.’ They said, ‘Well, that doesn’t matter.'” New faculty were eventually hired, Keele says, “But that shows you how much respect there is for Gary. The department just didn’t want to do things without consulting him.”

As other faculty rely on his clearsightedness and integrity, LDS Church departments and members of the media turn to Browning for perspective on things Russian. And he constantly works to deepen his understanding of the nation and its culture. In fact, his most recent trip to Russia was an effort to uncover the source of some LDS folklore.

During April and May 2000, Browning and BYU ethnographer Eric A. Eliason traveled to several regions in Russia, seeking information about the pre-1990 Russian “Mormons,” whose existence was attested in stories widely repeated by missionaries and LDS Church members in Russia. As they visited regions where the stories had originated, Browning and Eliason found local people using the word “Mormon” but no evidence of LDS beliefs. After interviewing both religious studies experts and villagers, they concluded that in some regions the term “Mormon” has been applied to any non-mainstream religious sect. Along with Russian experts, they hypothesize that such usage arose from the sensationalized polygamy stories that traveled to Russia from the American press, especially in the 1870s and 1880sand that “Mormon” became a catchword for people with “strange” religious practices.

Though his groundbreaking mission experiences and this recent investigative trip might suggest otherwise, Browning doesn’t see himself as an adventurer. He’s a contemplative man, very much at home among books and icons. When he’s not working or reading, he enjoys being outdoors, jogging, hiking, cross-country skiing, or caring for his garden. He typically walks or bikes to campus. And he loves his job.

“I enjoy my work. I revel in it,” he says. “I just feel immensely blessed to be with my colleagues and students in this department. I can’t imagine a way I’d rather spend my life.”