In Defense of Religious Freedom

By Francis E. George in the Summer 2010 Issue

In recent years Catholics and members of The Church of Jesus Christ of Latter-day Saints have more frequently stood side by side to defend human life and dignity. In addition to working together to alleviate poverty, we have been together in combating the degradations associated with the pornography industry; in promoting respect for the right to life of those waiting to be born; and in defending marriage as the union of one man and one woman for the sake of family. I am grateful that, after 180 years of living mostly apart, Catholics and Latter-day Saints have begun to see one another as trustworthy partners in the defense of shared moral principles and in the promotion of the common good of our beloved country. 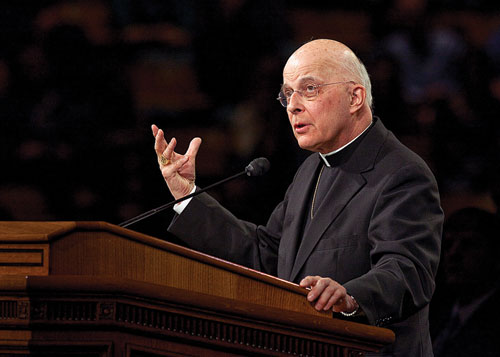 According to the Catholic understanding of religious freedom, this right cannot be reduced to freedom of worship or even freedom of private conscience. Religious freedom means that religious groups and individuals have a right to exercise their influence in the public square. Any attempt to reduce that fuller sense of religious freedom to a private reality of worship and individual conscience, as long as you don’t make anybody else unhappy, is not in our American tradition. It is the tradition established in part by Napoleon Bonaparte, who made civil peace after the terror of the French Revolution by limiting the Church to the sacristy and not permitting it to have a public role.

More than 150 years earlier, in 1634, a few dozen Catholics sailed from England to the shores of Maryland, where they and their associates would establish the first English-speaking Catholic community in America at a time when it was still against the law to build a Catholic church in the British Empire. They gathered in their homes until the time of the American Revolution. The first Catholic bishop of this country, John Carroll, was profoundly grateful for the First Amendment of our Constitution, which permitted the Church to come out of the basements of Catholic homes and to take part in public life. The Founding Fathers understood when they amended the Constitution that the separation of church and state springs from a concept of limited government and favors a public role for religious bodies in promoting civic virtues.

When government fails to protect the consciences of its citizens, it falls to religious bodies to become the defenders of human freedom. We can and should stand as one in the defense of religious liberty. In coming years, interreligious coalitions should become a vital bulwark against the tide of forces at work to reduce religion to a purely private reality.

If this continues to be our shared calling, then we will defend religious liberty, first, for the good of law itself, knowing that good law protects everyone’s rights; for the good of society, believing with Alexis de Tocqueville that churches and religious bodies play a mediating role in fostering a nation’s civic life; for the good of the people whom we shepherd in our own communities. Sometimes our common advocacy will make one of us the target of retribution by intolerant elements. Despite that, if we stay together and go forward together, the common sense and the generosity of the majority of people, as well as the love that is present through God’s grace in the hearts of all people, will, I believe, bear much fruit.

Our churches have different histories and systems of belief and practice, although we acknowledge a common reference point in the person and in the gospel of Jesus Christ. It strikes me that, however different our historic journeys and creeds might be, our communities share a common experience of being a religious minority that has been persecuted. We know that religious conviction combined with America’s founding vision of religious liberty and justice for all sustained our people in a hostile environment and enabled them to emerge from their enclaves to make a great and significant contribution to the political and cultural life of our nation. The defense of religious liberty affirms what is deepest in our self-identity.

His Eminence Francis Cardinal George, OMI, President of the U.S. Conference of Catholic Bishops and Archbishop of Chicago, gave the forum address “Catholics and Latter-day Saints: Partners in the Defense of Religious Freedom,” from which this article is adapted, on Feb. 23, 2010.

The Doctrine of Religious Freedom

An Influence for Good

In ways large and small, hundreds of thousands of BYU alumni make a positive difference in the world.

The Excellence of Religious Universities

We all hunger for the full appropriation of truth.