To commemorate Special Collections’ 50th anniversary, students and faculty voted on which Special Collections holdings they wanted to see most. Votes were gathered via a library-hosted blog, and requests varied from Hyrum Smith’s pistol to an original photograph of Kit Carson. The top 50 vote getters were then showcased for two weeks—five items a day—on the first floor of the Harold B. Lee Library.

Featured below are the voters’ 10 favorite artifacts organized by the year they were acquired by BYU.

Timeline of the Top 10 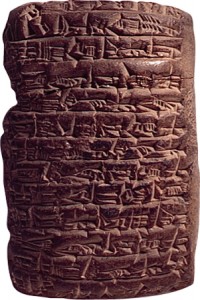 Cuneiform Tablet
The 2055 b.c. Sumerian inscriptions record the rations of beer given to people living during the reign of Shulgi, a king of the Third Dynasty of Ur. (The no. 6 favorite among student and faculty voters.)

1966
Leaf from the Gutenberg Bible
This page from II Kings comes from Johannes Gutenberg’s Bible. The capital letters and page headings were illustrated by hand with colored ink. No. 10

1969–1974
Handwritten Revelation from the Newel K. Whitney Papers
This manuscript is a copy of a revelation outlining priesthood duties given to Joseph Smith and corresponds with Doctrine and Covenants section 107. No. 5

1977
Cecil B. DeMille Collection
This collection includes tablets carved from Mount Sinai granite and given away by movie producer and director Cecil DeMille to promote The Ten Commandments. No. 9 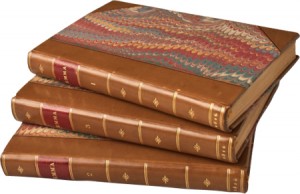 Emma, by Jane Austen
This first edition of Austen’s fourth novel was printed in 1816. The book was published in London anonymously, a year and a half after Austen’s death. No. 7

1993
Oscar Awarded to Ken Darby
This Oscar was awarded in 1957 to Ken Darby, a renowned Hollywood composer, for his scoring and vocal work in The King and I. Darby received six Academy Awards. No. 4 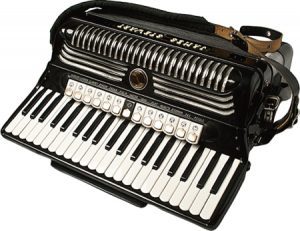 Jimmy Stewart´s Accordion
Stewart’s shopkeeper father agreed to cancel a customer’s debt in exchange for the accordion, which he required Stewart to play. Stewart played the accordion in a musical group at Princeton University and in the 1957 film Night Passage. No. 1

1993
Oscar Awarded to Ken Darby
This Oscar was awarded in 1957 to Ken Darby, a renowned Hollywood composer, for his scoring and vocal work in The King and I. Darby received six Academy Awards.

1997
Beatrix Potter Sketch
This original 1893 pen and ink sketch was drawn for the nursery rhyme “There Was an Old Woman Who Lived in a Shoe.” No. 2

2001
First Edition Book of Mormon
This copy, donated by a descendant of its original owner, James Bowne, came from the first 5,000 copies printed by Egbert Grandin in Palmyra, N.Y. No. 8