By Alf Pratte in the Winter 1996 Issue

As Gary D. Dayton cut the hair of Jeffrey R. Holland, then the president of BYU, a faculty member watched, listened, and was amazed at the good fortune of his barber friend.

“I’ve been at BYU for more than a decade,” he confided to Dayton after President Holland left the barbershop. “The most I’ve ever spoken to any of the presidents is a grand total of five minutes. You get to talk to them and many others for about 15 minutes a pop once a month for years.”

Today, Dayton smiles as he relishes the conversations he’s had with BYU presidents, faculty members, students, athletes, and members of the community who have made his barbershop in the basement of the Wilkinson Center one of the better-known institutions on the Cougar campus. 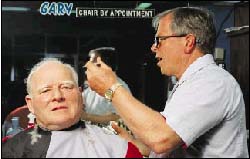 BYU barber Gary Dayton talks sports as he cuts the hair of longtime customer and friend Jack Nelson, an associate professor of communications. Dayton began cutting Nelson’s hair when the professor was a young student at BYU in the 1950s.

For the last 32 years, Dayton and his BYU barbers have been listeners and confidants for many in Utah Valley. Psychiatrist and BYU alum Robert H. Crist once asked Dayton if he realized how powerful his position was in getting people to talk freely about their problems, fears, hopes, and dreams.

“I spend much of my time trying to get people relaxed and to trust me enough to divulge their concerns,” Crist said. “They come to you and just sit down and talk. I wish I could stand behind you and listen.”

Dayton has been the operator of the Wilkinson Center Barbershop, the only private enterprise on campus, since he was awarded the franchise in 1964.

“Professors and others can teach for a lifetime and not have the chance we have day after day, week after week, month after month to really get to know people,” Dayton says.

Apparently the approach of Dayton and his team has caught on in Provo. Shortly before Thanksgiving, Dayton reckoned he cut his 200,000th head of hair. In addition, Dayton estimates he has worn out nearly 500 combs and 20 electric clippers, used a ton or so of talcum, and swept about five tons of hair. He has also had two shoulder operations.

“Cutting hair causes a lot of wear and tear on your upper body,” he explains.

In particular, Dayton reflects on the times he’s worn out his shoulders behind the heads of the movers and shakers at BYU: the athletes, the coaches, and the presidents, from the legendary Ernest L. Wilkinson to the recently retired Rex Lee. The only BYU president whose hair Dayton hasn’t cut in three decades has been Dallin Oaks. “President Oaks was raised in Provo, so he had barber friends throughout the community,” Dayton explains.

Of all the BYU presidents, Dayton says President Wilkinson was probably the most misunderstood. “Wilkinson had a tough administrative style and made many demands in his efforts to make BYU the school it is.”

But Dayton saw the compassionate side of the president when he cut Wilkinson’s hair in his condominium one day. President Wilkinson was reading a book about the plight of Black LDS Church members before they received the priesthood. Tears were in his eyes. “I was surprised at how sensitive he was to their problems,” Dayton says. “He told me he was praying night and day for the Blacks to receive the priesthood. Deep down he really was a kind and warm person.”

Dayton has similar recollections about Presidents Holland and Lee. Holland made it a point to learn all he could about the student custodial staff who cleaned the barbershop after Holland’s traditional end-of-the-day haircut appointment. “He knew their names, the names of their parents, and their little sisters. I was always impressed with the way he dealt with people.”

President Lee’s specialty was a sense of humor that goes back to the days when Dayton gave a crew cut to the young student from St. Johns, Ariz. Lee used to try out his new jokes on Dayton.

When Lee returned to BYU as dean of the law school and later as president, the haircuts and the humor resumed. “Even when President Lee was hurting from sickness and a crippling nerve disease, he was always happy,” Dayton says.

A native of Heber where his father was postmaster, Dayton came to Provo in 1956 after his graduation from barber class at the Salt Lake Community College.

“When I started, there seemed to be a barbershop on every corner in Provo,” he recalls. “Now there are only two or three left. The others were forced out by cosmetology centers and styling salons.” After apprenticing for one year, Dayton started his own business next to the Heaps pizza parlor, now Brick Oven, at the foot of the BYU campus.

Since Dayton began, he’s endured the ’50s flattop, the Ivy League look, and the hippie era, he says. “Today we are in sort of a day of total chaos. We hear and see everything.”

While the hair styles have changed drastically, most of the conversations haven’t. One of the major items of discussion with Dayton and his crew, which includes long-time veterans Dan Thomas, Kyle Probst, and Jim Cochrane, revolves around sports.

Paul Thompson, former BYU faculty member and now president of Weber State University, once said of Dayton’s barbershop, “It’s better than any place I know to get sports information.”

“I guess that’s because so many athletes and coaches come here,” says Dayton. “We hear stuff the media never hears at all.”

More than inside sports stories, however, Dayton recalls the 18-year-old athletes who slowly change as the BYU environment touches them. His favorite example is the 6-foot-11-inch, gangly Kresimir Cosic who got his first American haircut from Dayton after joining the BYU basketball team from Yugoslavia. In addition to becoming an All-American player, Cosic later became one of the ambassadors for his homeland before he died of cancer last year.

“When I first met him, he was very curt and to the point,” Dayton recalls. “Not much humor. After he joined the Church, he seemed more warm, congenial, and talkative.”

As with many of his clients, Dayton’s friendship with Cosic only grew after Cosic left BYU.

Notwithstanding the experiences he has every day as the confidant to hundreds, Dayton has some concerns–like a scripture in the Book of Mormon that suggests there will not be a need for barbers in the next life.
“I have been told that all the barbers will be demoted from cutting hair to greasing angel wings,” he jokes.

But before the next life, there’s another concern Dayton faces. As he nears retirement, he finds himself reluctant to let go. “This is really a good job,” he emphasizes.

An alumna’s imaginative scherenschnitte, or paper-cut creations, earned her a seat at Comic-Con.

People who counted and reduced their bites by 20-30% over a month lost four pounds in a recent BYU study.