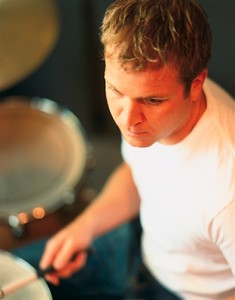 Christopher S. Peterson, ’99, Provo, one of the founders of the local band Sunfall Festival, balances his professional life with his zeal for music, a passion that has brought with it some growing fame.In December 2000, while the band was finishing its third album, Sunfall Festival won an online “battle of the bands” for a song that Peterson had posted at garageband.com nearly a year earlier. The prize included a $250,000 recording contract.Sunfall Festival has recorded three albums. Since its debut album in 1996, the band’s popularity has grown both inside and outside Utah. It was named one of the top 10 college bands of 1999 by Late Night with Conan O’Brien.Peterson graduated from BYU in public relations, and within a year he began teaching an advanced Web publishing class in BYU‘s Communications Department. He also works as a freelance graphic designer.The band’s drummer, Peterson is not the only BYU alum in Sunfall Festival. George H. Brunt, ’99 (Randi Daines, ’99), New York City, plays bass for the band and is a law student at New York University. In addition, the band’s guitarist, Scott Wiley, has taken classes at BYU. Provo native Amy Greetham performs lead vocals for the band.
WEB: www.sunfallfestival.com

Sunrise Over The English Channel

BYU opera students responded to their first invite to compete in a National competition by taking it all.

Artists capture the essence of American identity in a diverse exhibit of historical scenes.