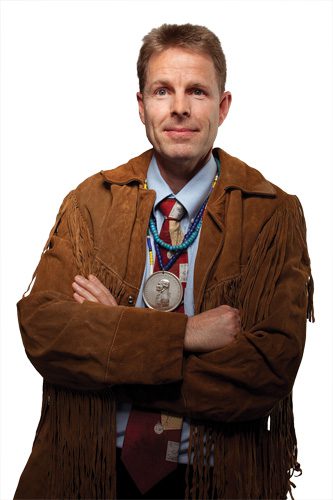 Jay H. Buckley (BA ’94) grew up attending the Fort Bridger Rendezvous, an annual reenactment of the fur trade between mountain men and American Indians. Now an associate history professor at BYU, Buckley’s continued interest in frontier America has yielded the award-winning books William Clark: Indian Diplomat and By His Own Hand?: The Mysterious Death of Meriwether Lewis. In October 2011 Buckley was elected president of the Lewis and Clark Trail Heritage Foundation (www.lewisandclark.org). Here he shares his favorite locations along the Lewis and Clark Trail for your next family vacation.

President Thomas Jefferson tasked his private secretary, Meriwether Lewis, with exploring the Louisiana Purchase and sent him to the American Philosophical Society to receive scientific training in astronomy, mathematics, and specimen collection. The society’s museum contains many of the 300 plant and animal specimens collected by Lewis and Clark, Clark’s 1814 master map of the West, and what I think is the most important part of the collection—the original Lewis and Clark journals.

Lewis and Clark spent the winter of 1803–4 across the river from St. Louis. Below the Gateway Arch, the underground Museum of Westward Expansion preserves some of the rarest Lewis and Clark artifacts. One of my favorite displays shows some of the Indian peace medals that the explorers gave to Indian leaders. A few miles upriver, on the Illinois side, the Lewis and Clark State Historic Site has a stunning visitor’s center, a cutaway keelboat, and a replica of Camp River Dubois, the explorers’ winter encampment.

Montana contains more miles of Lewis and Clark Trail than any other state. In addition to the interpretive center—with a theater, reenactments, and other exhibits—my favorite haunts in the area include the First Peoples Buffalo Jump State Park (where Indians chased bison off the bluffs), the 18-mile portage around Great Falls, and the scenic White Cliffs of the Missouri River (where I enjoy taking a three-day canoe trip).

After their epic transcontinental journey, the 33-member Corps of Discovery spent the winter of 1805–6 at Fort Clatsop, a few miles from the Pacific Coast. The national park there includes a replica of the fort and reenactments at the Salt Works site, where the explorers replenished their supply of salt by boiling seawater in large kettles.

Ask an Expert-Discerning the Details

Check out these safety guidelines for hiking.

Ask an Expert: How to Make Great Pictures