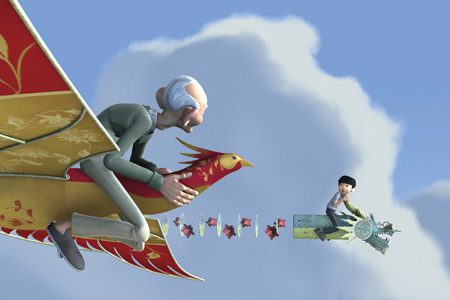 The BYU Center for Animation’s latest short film, Kites, won a student Academy Award and a student Emmy, bringing BYU’s total Emmy count to nine in the six years it has entered films. Kites is about a young Chinese boy struggling to accept the death of his grandfather. A mystical power allows him to fly kites with his grandfather once more. Coproduced by Jordan L. Pack (BFA ’07) and James L. Jackson (’10) and directed by Jed Henry (’09), the story is the first attempt BYU animators have made at a serious storyline. Although no words are spoken, the original music composed by Morgan Shaw (BM ’08) embraces the mood of the boy’s journey through grief and understanding. The award-winning film took about 18 months to produce, combining the work of more than 40 students.