By Erick Carlson in the Winter 1999 Issue 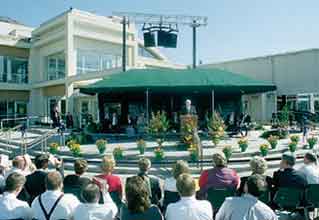 President Gordon B. Hinckley, chairman of the BYU Board of Trustees and President of the LDS Church, dedicated the newly renovated Ernest L. Wilkinson Student Center Oct. 5. Nearly 8,000 sun-baked students, faculty, and visitors joined the ceremony in Brigham’s Square, a new plaza northwest of the building.

“After a third of a century of intense activity, the building became worn down with the marching of hundreds of thousands of feet through its halls,” said President Hinckley. “Now it has been reworked from basement to roof. It has become a new and shining emblem of the spirit of this great institution.”

Known originally as the Y Center, the building was first completed in 1964 and dedicated a year later as the Ernest L. Wilkinson Center. Earlier this year, just as the dust from the most recent construction began to settle, the 35-year-old structure quietly underwent another name change to become the Ernest L. Wilkinson Student Center (WSC).

“From the beginning his heart was with the students,” said BYU president Merrill J. Bateman, paying tribute to Ernest L. Wilkinson, who led the university during 20 years of unparalleled growth. “He loved young people. He was a great builder of not only buildings, but also men and women.”

“What we have today here is really an extension of that great shadow of Ernest L. Wilkinson, which began back in those days,” President Hinckley said. “He has left his imprint on this great institution, and we’re all the better for it.”

Back in the days of President Wilkinson, the ELWC was the largest building on campus and its facilities were sufficient for the 16,000 students. But the university grew and the building was cramped at times with a student body nearly double in size. “The infrastructure was either worn out or outdated, and the building was too small for the student body,” explained Jerry L. Bishop, director of the WSC, who oversaw much of the remodeling.

The project increased usable space by 25 percent, and with an estimated 498,000 square feet on seven levels, the building is now one of the largest student unions in the United States. The additional 100,000 square feet of space increased the number of offices in the building–from 85 to 286–to make room for Student Employment Services, Women’s Services and Resources, the International Student Association, and the Counseling and Career Center, among others. In fact, the extra room has allowed most student services to be consolidated within the building.

Many of the new offices are located in the northwest wing of the building, built where the Memorial Lounge once stood. The lounge has been razed, but its plaques and memorabilia now fill Memorial Hall, tucked into the east side of the building on the second floor.

The facelift has given the building a modern look, perhaps most noticeable in the Cougareat and the new Terrace. The revamped Cougareat now resembles a mall food court with independent vendors and a wider variety of food choices. The open-air West Patio has been replaced by the enclosed, naturally-lit Terrace, which sports a surrounding balcony.

The infrastructure was updated to meet American Disabilities Act standards, from door widths to railings. The building also needed an electrical upgrade to provide more power for the additional offices and Internet connections that give laptop users access to the university computer system from study areas.

Outside of the building, a brick square has been added and has been divided into three areas with names submitted by the students. The two walkways south and west of the WSC are called Lee Lane and Wilkinson Way, respectively. The heart of the quad is now known as Brigham’s Square.

At the services President Hinckley sealed a time capsule to be opened at the 100th anniversary of the original dedication: 2065. The capsule contains, among other memorabilia, a mouse pad, a student ID with a picture of Cosmo, a bowling pin, a football uniform, and scriptures signed by the First Presidency.

Remarks at the dedication validated the recent name change to the Wilkinson Student Center, heralding the building as the center of student life. “This is your building,” President Bateman told students in attendance.

Calling it an important facility on campus, he said, “Those who grind away at their studies need an occasional respite. They need a place of refuge. They need a place where they can enjoy the real spirit of BYU, and this they will find within the walls of this great structure.”

Cougar fans, it’s time. Generous private donors stepped up to fund the construction and future maintenance of the annex.

32-year-old Wilkinson Center Gets a Face-Lift

The Wilk is getting renovated to become a truer center of campus.