Four seconds were all that separated the BYU women’s cross country team from their third consecutive NCAA championship. Instead, the team finished a close second at the national meet in Waterloo, Iowa, in November, just eight points behind 2003 national champions Stanford University. 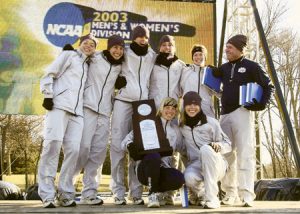 Stanford finished with 120 points to BYU’s 128. Providence was third with 222 points.

“We just ran up against a better team,” said women’s cross country head coach Patrick E. Shane, ’71, after the meet. “But this kind of competition is what builds rivalries.”

The runners faced difficult conditions on meet day, with 21-degree weather and 15 mph wind chills, but the Cougars managed to pull off several strong finishes.

In her last collegiate cross country meet, senior All-American Michaela Mannova, ’04, led the Cougars, placing fourth overall, which was her best finish yet at a NCAA national meet.

“We just ran up against a better team. But this kind of competition is what builds rivalries.” –Patrick Shane

“This race was really too close to call before the race started,” Shane says. “I am pleased with my young women; we really did have the race we wished to have. Now I am just happy for us and for Stanford.”

Junior Nathan M. Robison, ’05, led the BYU men’s cross country team to its 19th place finish, coming in a strong 29th and earning an athletic All-America citation, which he says was his goal for the season.

The Marostica family shares a recipe for jicama mango salad and pork chop marinade from their Berkeley kitchen.