Using his economics training, a BYU professor evaluates the effectiveness of school interventions. 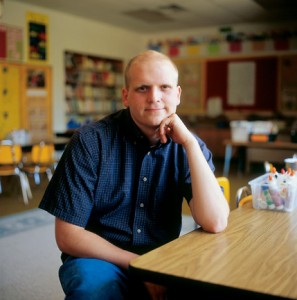 Economist Lars Lefgren’s interest in improving society took him to the classroom, where he has studied the value of various programs to help struggling students. Photo by Bradley Slade.

Lars J. Lefgren, ’96, wants to know why people do what they do. Why, for example, does one person succeed while another fails? And how do society and institutions promote or inhibit success and productivity?

Questions like these bring the assistant professor of economics down out of theoretical clouds into real-world concerns in his lectures and research.

“He always makes an effort to ask interesting questions and address real-world issues, which keeps class fun,” says Matthew T. Sederberg, ’05, who has taken two classes from Lefgren and worked as one of his research assistants.

Lefgren wears his enthusiasm for economics and its applicability with pride, which is ironic considering he whimsically chose his field as an undergraduate because the English courses he was planning to register for were full. Economics, Lefgren says, “does a good job of explaining a lot of things.” Most recently, Lefgren has used economics as a lens to focus on educational achievement and recommend ways to support struggling students.

“My greatest interests in terms of economics have always been poverty and crime, and education fits right in there,” Lefgren says. “If you’re interested in issues of helping the most disadvantaged members of our society, I think education is the best place you can start.”

Lefgren has used economics research methods to study the short-term effect of school on juvenile crime, as well as a number of other sociology-related questions. And with escalating calls across the country for increased student achievement and accountability in public schools, his education research recently made national headlines. His studies showed that a policy requiring low-achieving students to attend summer school and possibly repeat a grade created lasting improvements for young children.

Along with Brian A. Jacob, assistant professor at Harvard’s John F. Kennedy School of Government, Lefgren saw a gap in research on programs designed to help low-achieving students. While the two were graduate students at the University of Chicago, they studied a Chicago Public Schools policy, implemented in 1996, that required summer-school attendance for third- and sixth-grade students who did not meet certain standards on the Iowa Test of Basic Skills. Students who failed the test again after summer school were required to repeat a grade.

“It didn’t transform them into Albert Einstein, but it did have a significant impact,” Lefgren says. “There are so many interventions that don’t work; it’s nice to find one that does.”

Although the results for third graders were promising, Lefgren and Jacob found no real increase in achievement for sixth graders. Lefgren believes the intervention programs for sixth graders are ineffective in part because of a higher negative social impact for older children, who might be ostracized for below-average achievement.

Lefgren says these results are important for a number of reasons. 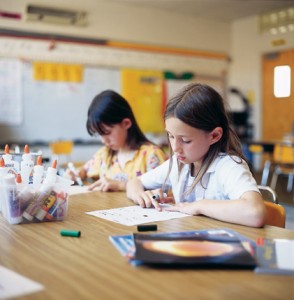 “Accountability is becoming increasingly important in schools, but these programs are really expensive, and a lot of people are trying to implement them,” he says. “So if you’re going to spend millions, you want to make sure they’re going to work.” And, he adds, “I think the research emphasizes that if you’re going to intervene, the earlier you can do it, the better.”

Policies like those in Chicago are gaining momentum across the country. Nineteen states require students to pass district or state tests to be promoted to the next grade, and 16 states offer funding for districts that have summer programs for low-achieving students. With all of the money going toward these programs, says Jacob, “it’s important for school districts to reflect on how effective their programs are.”

Echoes Lefgren, “If kids are going to be in school for 12 years, we need to look at these things so that, while they’re there, we can make it effective for them.”

More of the team’s research on the effectiveness of public schools was recently published in Journal of Human Resources. Based on findings from the same Chicago Public Schools program, Lefgren and Jacob explored the value of small increases in teacher in-service training and found that the increases had no significant effect for students’ reading and math achievement. Again, in this situation, Lefgren says, “If the program isn’t working, they ought to sit down and evaluate why it isn’t working. If they want it to work, it’s going to require more than marginal increases. It will take lots of time and lots of hard work.”

Regarding Lefgren’s recent research, James B. McDonald, Economics Department chair and professor at BYU, says, “This is important research in the current dialogue on educational topics.”

Lefgren is pleased with the findings, and, although he is careful not to overstate their significance, believes they are valuable for educators trying to improve achievement and accountability in their schools. “I feel like we got it right,” he says. “It’s been really satisfying.”

Lefgren’s excitement about economics and his ability to address questions with a keen eye are infectious both in his classroom and among colleagues.

“Lars is a great person to work with, because he’s very bright, he’s very quick. He not only recognizes good ideas but contributes great ideas,” says Frank L. McIntyre, ’98, an assistant professor economics at BYU who is collaborating with Lefgren on other research. “And he’s open-minded in terms of looking at a variety of different angles of every issue.”

Jacob, who hopes to continue working with Lefgren in the future, adds, “Lars is absolutely one of the best labor economists out there. He is super smart; he is very creative. And he is impatient and lazy, but in a very good way. His impatience and his laziness often lead him to figure out efficient ways of doing things. While other people might make a particular issue overly complex, Lars won’t have the patience for that, so he’ll realize there are better ways of looking at it.”

Lefgren plans to continue researching education-related issues, although he wants to explore other sociological phenomena as well. “As an economist,” he says, “I want to know why people are doing what they’re doing. And my interests are pretty varied, but to me, that keeps it exciting.”

The father of three children, Lefgren says education will remain a central interest for him. “If you want to make a difference in the world in the long run,” he says, “the best thing you can do is invest in your children.”

What Should Never Be Forgotten

Age is interesting. We can find it sad, or we can find the beauty in our loved ones and learn from their journey.

Why Everyone Should Be a Scientist

As Latter-day Saints with a destiny to build Zion, we need to be standard-bearers of enlightened learning.