By Brad Rock in the Spring 1997 Issue

The longest season in BYU football history–college football history, for that matter–ended the way it began, with the Cougars messing up people’s plans. With the Western Athletic Conference excluded from an automatic berth in the three “alliance bowl” games, the Cougars beat all but one team they met, anyway. They began by shocking nationally ranked Texas A&M in the first game of the college football season and ended with a 19-15 win over No. 14 Kansas State in the Cotton Bowl. The only loss was a 29-17 defeat at the hands of Washington. That made it a 14-1 season for the Cougars, their second-best year ever. 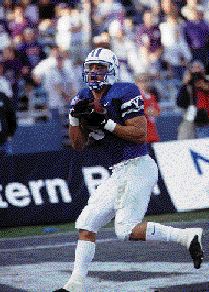 And somewhere the bowl alliance is blushing.

Curiously, the Cougars may have earned more positive publicity for themselves and the WAC than if they had been invited to an alliance bowl–a group of three bowl games from which the national champion was derived. Beating Kansas State in the Cotton Bowl probably did more for their stature than, say, going to an alliance bowl (Sugar, Orange, or Fiesta) and possibly losing. As it was, they became the alliance’s neglected stepchild. Ranked No. 5 in the nation but overlooked when the alliance invitations came out, the Cougars came to represent underappreciated football teams everywhere. Along the way, they became the first team in history to win 14 games in a season and brought cries for a more equitable way of deciding the national champion.

“The most serious injustice this season . . . concerned the WAC,” wrote Cathy Harasta, of the Dallas Morning News, in a Jan. 2 column.

“Any cooperative that excludes the WAC is unconscionable. WAC champion BYU, at 13-1, fell out of Alliance at-large consideration because even at 10-2, Nebraska was more desirable to the Orange Bowl and Penn State (9-2) appealed to the Fiesta Bowl as a strong generator of TV ratings.”

Harasta wasn’t the only one calling for a more equitable system. Los Angeles Times columnist Mike Downey joined the ranks of those suggesting a 16-team playoff–which would have included BYU this year.

“We want a college football champion. Understand? Hello? NCAA? Anybody home? We don’t want a Richard Nixon proposing which school should be national champion, or a Georgia Tech hailing itself as our nation’s ‘co-champion,’ or a Brigham Young feeling (boo hoo) unfairly neglected, or an Arizona State being cheated of its chance because of a nonnegotiable commitment to the ‘wrong’ bowl,” he wrote.

“We want a champion. One.

“We don’t want some loony ‘alliance’ that lets a team with a 10-2 record in Laramie, Wyo., sit home on the front porch whittling, while a four-time loser from Austin, Texas, gets to play on New Year’s Day, only because it won its conference.

“We don’t want a BYU team winning 13 of 14 games, but still unsure after the 14th game if any New Year’s game will kindly extend it an invitation.”

It didn’t hurt the Cougars that they would have drawn attention no matter how many games they won. Their schedule was raising eyebrows before anyone took a snap. They started Aug. 24, playing Texas A&M in the Pigskin Classic, and finished Jan. 1 in the Cotton Bowl–15 games, the most in NCAA history, in six separate months. They won 12 consecutive contests.

“And so, Brigham Young reached back and went deep into history, fashioning a 19-15 victory in the Southwestern Bell Cotton Bowl Classic on (Steve) Sarkisian’s 28-yard pass to (K.O.) Kealaluhi and Omarr Morgan’s game-saving interception moments later,” wrote the Fort Worth Star-Telegram’s Whit Canning. “In the process, the fifth-ranked Cougars (14-1) finally capped a seemingly endless season, becoming the first team in NCAA history to win 14 games in a season and silencing a profusion of critics–including 40,000 dejected Wildcats fans, among the handsome crowd of 71,928.”

Another Star-Telegram writer, columnist Jim Reeves, added: “Deliberately snubbed by the bowl alliance when the Tier I bids went out, Brigham Young made a statement for the little guys of the world with yesterday’s dramatic 19-15 victory against the 14th-ranked Wildcats in a stadium boasting more purple than Prince’s closet.

“‘Fourteen wins!’ BYU quarterback Steve Sarkisian screamed as the game ended and the Cougars flooded the field to celebrate. ‘How many teams can say that?’

“Exactly zero in the Division I ranks, and there’s absolutely nothing the alliance or anyone else can do about it.”

Reeves continued, “If BYU, at 14-1, couldn’t make it in this year, you have to wonder if anyone outside The Chosen ever will.”

Reeves concluded by quoting Sarkisian: “I’ve got the ball,” Sarkisian said, waving it above his head as he trotted off the field. “I’m ready to play another one.”

Added Reeves, “Any of you big boys in the alliance care to dance?”

Frank Luska, of the Dallas Morning News, began his column by detailing the beating Sarkisian took from the Kansas State defense. “Compared to the physical outlines of the classic quarterback, the guy looks like a plumber,” he wrote. “He sports a crewcut instead of curls. He wears black shoes rather than white low-cuts. If he put on a pair of socks to play Kansas State in the Cotton Bowl on Wednesday, they disappeared below shoe-top level.

“He has the short legs of a linebacker, the overall build of an undersized guard, and runs slower than he looks. He has a strong heart, a stronger body, and needed both while helping engineer a tense, 19-15 victory for Brigham Young.

“This was Steve Sarkisian, alleged to stand 6-2, but only if he grew two more inches of hair. He’s listed as a 210-pounder. That part appears accurate, since Sarkisian looks thick all over more than any place else.

“History will recall Sarkisian as the passer who tied Roger Staubach’s 1964 Cotton Bowl record of 21 completions. He also lacked one passing yard and one pass that would have tied other Cotton Bowl records–292 yards by Kevin Murray of Texas A&M and 37 attempts, a record held by three quarterbacks.

“I shall remember Sarkisian for getting up. He did a lot of that, because Kansas State brought with it a defense that had been properly ranked No. 4 in the nation against the pass. He was hit high and low, from inside and outside, and knocked down more times than Buster Douglas.”

Later, Luska praised the matchup the between teams. “Want to restore the Cotton Bowl to pre-eminence? Make K-State and The Wheat People who follow it the permanent host team. The Wildcats came to play. Their fans came to watch, in record droves,” he wrote.

He continued, “The Cotton Bowl provided a better pairing than its first time out last year as a non-Tier I bowl. BYU brought glamour, attached to its history of raising NFL quarterbacks such as Jim McMahon, Steve Young and Ty Detmer. K-State brought the crowd.”

Neal Farmer, of the Houston Chronicle, quoted BYU players after the victory and added, “And so goes the talk, words thrown around like a Steve Sarkisian pass, hitting marks and making points. The Cougars came to Dallas looking for respect and were afforded some in their 12th consecutive win.

“That respect wasn’t easy, though. Sarkisian threw a 28-yard touchdown pass to wide-open receiver K.O. Kealaluhi with 3:39 remaining in the game to help the Cougars to their winning margin. BYU then had to wait as K-State quarterback Brian Kavanagh drove the Wildcats down the field to the BYU 12 before defensive back Omarr Morgan intercepted a pass at the three-yard line to secure the victory with 55 seconds remaining.”

“After being snubbed by the bowl alliance, the No. 5 Cougars think they proved they belong with the nation’s elite after a dramatic 19-15, come-from-behind victory against Kansas State in the Cotton Bowl.”

Mark Janssen, of the Manhattan (Kansas) Mercury, combined the observation that Kansas State played poorly with praise for BYU.

Janssen added, “Credit BYU, for sure. But in all honesty, Kansas State was not a good football team.”

Columnist Fred Mann, of the Wichita Eagle, called BYU a team “guided by the nation’s most efficient passer, who can wear out a defense by making it chase people for 40 yards on pass plays nearly every down.”

Thus the Cougars ended the Longest Season Ever with their second-highest finish ever (No. 5). It was a season that ended in superlatives. Only the 1984 team that went 13-0 and won the national championship had a bigger finish. And now, 12 years later, the Cougars are still making the big bowls wonder.

Brad Rock is a sports columnist for the Salt Lake City Deseret News.

See what happened during the Fall 2013 sports' season.

An A+ In Sportsmanship

A new campaign encourages BYU athletes and fans alike to aim for excellence in sportsmanship.

Participating in high school sports pays off in more ways than you might think.