A Sense of Place, A Sense of Family: Artist Creates Sculptures for Denmark 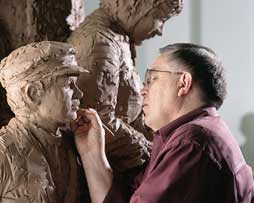 Sculptor Dennis V. Smith, ’66, works on The Family, an immigrant group he created to commemorate the 150th anniversary of LDS missionaries work in Denmark. It will be unveiled in Denmark this summer.

In 1961 at the age of 19, Dennis V. Smith, ’66, packed his single beige Samsonite with missionary clothes, left his childhood home in Alpine, Utah, and crossed the Atlantic to Denmark. He would spend the next two-and-a-half years feeling homesick much of the time, but also forging a relationship with Denmark that would profoundly impact his life and his path as an artist.Nearly 40 years and a distinguished artistic career later, two of Smith’s sculptures will be placed at significant portals in Denmark. The pieces will commemorate the 150th anniversary of the beginning of LDS missionary work there and the ensuing emigration of nearly 18,000 Danish converts to America.Smith is probably best known for his large, impressionistic sculptures of children, women, and families. Many of his pieces are familiar to BYU alumni, including 11 bronzes commissioned for the Nauvoo Women’s Monument, two flying machines that hang above the escalators in the Delta Terminal of the Salt Lake City International Airport, and The World of Childrensculpture at the Primary Children’s Medical Center, a welded assemblage of small bronzes that depicts 32 children clamoring about.One of the sculptures that will go to Denmark is being donated by Smith. Christinais a life-sized, bronze rendering of a slender young woman standing straight and tall with her face toward America, her hair whipped nearly horizontal behind her by the icy winds of the North Sea. She will stand at the harbor in Copenhagen where thousands of LDS Danes boarded ships for America.“A smaller version of this image was one of my first sculptures and is a symbolic portrait of my great-grandmother Christina Beck Petersen Robertson, who crossed from Denmark to America at age 17,” says Smith. “She is an embodiment of all immigrants who have ever been torn between homeland and a better life in a new home. I tried to capture her in that moment we all experience of committing ourselves to our hopes for the future, knowing that we must say goodbye to what we have known before.”A casting of Christinais familiar to many in the BYU community as a piece in the sculpture garden south of the BYU Museum of Art. Another casting stands on the grounds of the Alpine Art Center, a complex containing an art gallery, classrooms, and a foundry that Smith and three partners completed in 1998.
The second sculpture going to Denmark, The Family,depicts an immigrant family about to leave Denmark. It will be unveiled on July 4, 2000, at the entrance to Rebild National Park in Jutland, where since 1922 Danes have gathered with Americans who have emigrated to Denmark to celebrate America’s Independence Day and the close ties between the two countries.While the concept of Christinawas born decades ago, The Familywas commissioned specifically for the 150th anniversary celebration. The piece is a composite of archetypal immigrant figures–mother, father, and two children with their faces turned toward their new home. A third child, an infant, is in its mother’s arms. To Smith, the newborn is a tribute to the many infants who died while crossing the ocean, as did Christina’s baby brother.In this major piece, the parents and children rise as connected figures from an unformed hunk of clay like a tree rises from the earth. The roots are hidden, but you know they’re there–connected deeply to the soil beneath. Leaning against the back of this family unit is an older woman, perhaps a grandmother, who looks backward rather than ahead. Conceiving this lone figure and her placement, which balances the piece aesthetically and symbolically, was an exhilarating moment for Smith.“It was one of those epiphanies,” he says. “After getting the go ahead for the piece, I did a quick model in wax. When the idea came to me of the older woman looking in the opposite direction from the rest of the family, it just felt right. I did the entire maquette in about 20 minutes.”Both sculptures are especially meaningful to Smith because of their connection to his ancestors and the theme of crossing an expanse away from one’s old home to a new home.
A sense of place is central to Smith’s personality. His right-brained, tactile nature meant that wherever he grew up, he would become unusually attached, whether it was New York City or Alpine, Utah, a tiny town nestled against the mountains in the northeast corner of Utah County. One of five children, Smith was the only one with artistic interests.

Smith’s art is rooted in his sense of place – Alpine Utah, his childhood home, and Denmark, where he served a mission.

“There were no models for me in a little one-ward farming community like Alpine. My mom wasn’t much interested in books, my dad worked at Geneva Steel, and here I was the only right-brained thinker among the 14 kids my age I went to school with,” recalls Smith, relaxing in a book-packed corner library in his studio.Everything at school–writing, grammar, math–was oriented toward left-brain thinking, and Smith struggled. His saving grace was a teacher at American Fork High School named J.N. Washburn.“Mr. Washburn infected me with his passion for art and helped me feel at home within the right-brained thinking. At that point everything suddenly made sense.”Some of the strongest imagery from Smith’s childhood is of trails, roads, and bridges in Alpine. He remembers his awe as he stood underneath Creek Bridge and listened to cars bumping across.“Where the road from our house into town crossed the Creek Bridge, it became an entrance into the wider world. When I crossed it on my way to Denmark, it became an entrance into the world beyond childhood.”After arriving in Denmark, Smith remembers being disoriented and out of place.
“At first I felt almost claustrophobic, being in an environment to which I had no object attachment, because my identity is so defined by objects. But Denmark was small enough that I could absorb it, and eventually I became very personally attached.”The mission years in Denmark taught him that he could survive and even thrive in an unfamiliar place.“Denmark imprinted a whole new meaning onto what home was. Place becomes an axis from which to experience, but to always come home,” says Smith.After his mission, Smith returned to Utah, married (his wife, Veloy, graduated from BYU in 1964), and in 1966 finished a bachelor of fine arts degree at BYU. He stayed on for a year of work on a master’s degree but felt restless and discontented.“I found myself arguing with everyone in the department. I just wasn’t happy. Underneath, I knew if I finished a master’s I would end up teaching, and that scared me. I really wanted to be an artist.”So he headed back to his second home–Denmark–this time as a student with a wife, two children, and a meager $1,700. He attended the Danish Royal Academy for a year, an experience that had a decisive influence on his development as an artist. At the time, modernism, avant garde, and abstractionism were pushing the boundaries of art, but artists in Denmark were clinging to traditional structures. There, Smith’s affinity for the human figure was validated, and he was able to reaffirm his personal artistic path.“Family and children are the core of my work,” says Smith. “Those themes are not only passé but generally ridiculed. When everything broke from the center, Denmark offered a nest of nourishment in a world of pseudo-sophistication. I didn’t get caught up in the contemporary movements and lose my roots.”That’s not to say that Smith’s work is entirely conventional. Though his work is rooted in traditional values, the exploration of those values can yield compositions that are unorthodox and even eccentric, such as the airships at the Salt Lake airport.“You might say I have the passion of a modern sensibility trapped in the body of a traditionalist. Conservatives tend to see my work as a bit flaky and on the edge. Avant garde people probably see it as tame and un-innovative. Somewhere in the middle, I ply my images,” he says.After almost a year in Denmark, Smith ran out of money. Others urged him to move to New York or San Francisco if he wanted to become a serious artist. But Alpine beckoned.“What was important was to come home. It was important to my soul. The core of my art comes from who I am and what was implanted in my awareness of what home is.”So he returned with his family and settled in Alpine. In 1978 he built a home in neighboring Highland along the edge of Dry Creek, the same creek bed he played in as a child. His large studio fills the lower floor of the house, and there he produces not only sculpture, but also painting and poetry. And though he has anchored himself in his childhood environment, Smith frequently travels abroad; he has made 10 trips to Denmark. Every time he leaves home he feels homesick, he says, but the journeys always enrich his art.
A major motif in much of Smith’s work, especially his sculptures, is children at play–skating, dancing, running, setting asail a little boat. These figures express dual themes for Smith–the earthy, tactile experiences of his childhood and his more ephemeral and spiritual hope for a life beyond this one.“The child at play is acting out what he cannot envision–adulthood. When a boy plays with a car, it becomes a bridge to assimilation. To me this is a spiritual metaphor for all of us. We have no way of knowing what’s on the other side any more than a kid can understand what it is to be a parent. My way of dealing with this is through aesthetic expression.”The sculptures being prepared for Denmark are a further expression of this theme.“Bridges, links, hooking, crossing over–my art is almost always exclusively and literally an expression of my hope for transcendence. Our anxiety about death is an anxiety about being away from home but with the hope of going home, in the same way Christina standing on the edge of the ocean doesn’t know if she’ll ever make it to the other side. She can’t fathom that, but she hopes for it. I really think we’re all that way.”

Cahoon has been playing for the Montreal Alouettes since he graduated from BYU.

A BYU study shows why people in some states break the bank more than others.

In five years Jacob Durrant earned bachelor’s degrees in mathematics and Portuguese and a master’s degree in biology.