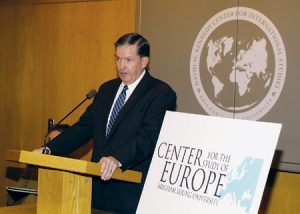 At the opening of BYU’s new Center for the Study of Europe, President Cecil O. Samuelson praised the faculty and students who aided in its creation.

AFTER a dozen years as an elementary teacher in Arizona, Elizabeth Christensen, ’06, began to feel that something was missing in her life. The answer, she decided, was to earn her doctorate in instructional psychology and technology from BYU.Not only was she accepted into BYU‘s program, but the mother of six received a foreign-language and area-studies (FLAS) fellowship to study Italy and Italian, along with her chosen field of study.“I have always considered the fact that I was accepted into BYU to be a miracle in my life,” she says. “Now that I have received the FLAS grant, I would include it as one of the greatest miracles of my life.”Christensen’s fellowship is one of seven awarded to BYU graduate students this year to help them expand their understanding of Europe and build their foreign-language skills as they complete their graduate coursework.Funding for the grants comes to BYU as part of a Title VI grant of more than $1.2 million from the U.S. Department of Education, which funds BYU‘s new Center for the Study of Europe. The center officially opened on Sept. 25.“This is the first area studies grant awarded by the U.S. Department of Education to BYU,” says international vice president Sandra Rogers, ’74. “It is a tribute to our fine faculty and to the strengths we have in international area studies.“In fact, BYU‘s excellent reputation in foreign-language teaching and the high percentage of the student body that speaks a European language are major reasons BYU was selected to receive the grant, says Wade A. Jacoby, ’87, associate professor of political science and the center’s new director. More than 10,000 students and 150 faculty members at BYU speak a European language, and the university offers some 500 European language courses, as well as approximately 500 non-language courses on Europe.At BYU the grant will be used to prepare students for careers related to European studies. New courses will be added, more internship opportunities in Europe will be available, and a portion of the grant will support new BYU library acquisitions.At the community and national level, the grant will establish outreach and consultation services for educators, businesses, and media.“The government uses the Title VI programs to help Americans better understand foreign societies,” Jacoby says. “Few Americans recognize what a huge effort Europeans make to understand us because we are their most important partner in every way. But it’s equally important that we work to understand them.”